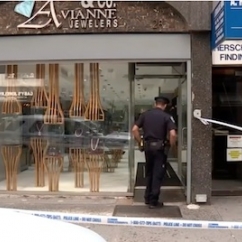 New York, NY—A jeweler popular with hip-hop celebrities was robbed in the middle of the day on Sunday, with four workers taken hostage.

Three robbers attacked Avianne & Co. on 47th Street at noon on Sunday, tying up the store’s employees with zip ties and duct tape, and forcing the store owner to open the safe. They then cleaned out the safe and showcases, dumping heavy gold and diamond-intensive merchandise into a duffel bag and fleeing the scene. Left: A police officer stands in the doorway of Avianne & Co. after the robbery.

Surveillance video released by New York City police on Monday shows the robbers in action. Initially posing as customers, one robber—claiming to be shopping for a ring—held a gun on two employees in a room at the back of the store while the other two robbers held employees at gunpoint in the front of the store and took the merchandise, reportedly valued at $4 million. 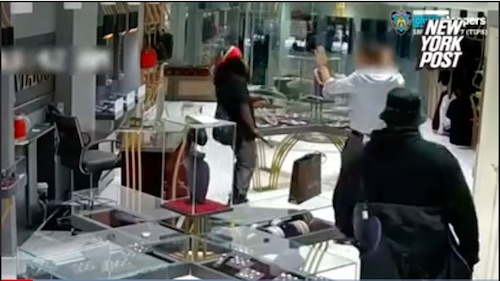 A still image from the surveillance video shows the robbers holding a gun on a store employee. Photo: New York Post.

A bulletin from the Jewelers Security Alliance says the suspects were buzzed into the store. One was wearing a suit and a fedora, a second was wearing a bucket hat, and the third had a red and black cloth on his head. Two of the suspects are believed to have been wearing wigs with dreadlocks and ABC-7 reports the suited suspect also wore cowboy boots. He was the one that asked to look at rings.

None of the employees were hurt and investigators are looking at why that store was targeted.

Despite Hong Kong Protests, The Show Will Go On

Hong Kong—Several industry organizations have asked organizers of the Hong Kong Jewellery & Gem Fair to postpone the event, citing security concerns stemming from the many pro-democracy demonstrations and riots happening there since July 1. More violence erupted again on Sunday.

But show organizers have said no, the show—slated to open September 16—must go on. 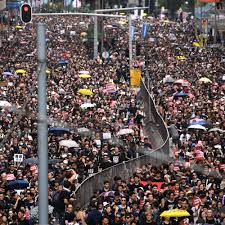 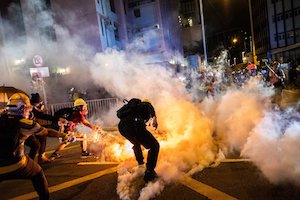 Pro-democracy protestors have been thronging the streets of Hong Kong for two months; sometimes peacefully and sometimes not. Photos: The Wall Street Journal, left, and The New York Times, right.

A report in National Jeweler says India’s Gem & Jewellery Export Promotion Council (GJEPC), the Antwerp World Diamond Centre (AWDC) and the Israel Diamond Institute (IDI) all asked Informa Markets, owner of the show, to postpone the event to a later date. All three organizations cited large percentages of the exhibitors they represent asking to withdraw from the show. In addition to safety concerns, they’re also worried that their insurance policies don’t cover losses due to riots or war.

But Informa says it has put both rigid safety precautions for all Show attendees and contingency plans “for any scenario” into place, and that it has not received any requests for cancellation from other exhibitors or visitors.

For now, IDI and AWDC still plan to have their pavilions at the show.

Carlsbad, CA—Kathryn Kimmel, longtime senior vice president and chief marketing officer of GIA (Gemological Institute of America), and the founder of its famed Career Fairs, is retiring as of August 30.

During her 29 years of service to the Institute and its mission to protect consumers, she built a remarkable and enduring legacy, says Susan Jacques, GIA president and CEO. 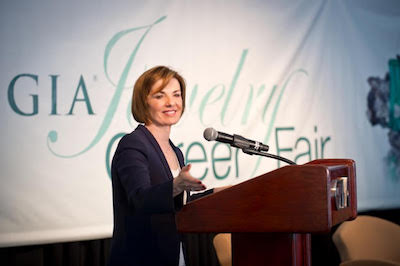 “Kathryn opened doors and created opportunities in the gem and jewelry industry for so many women and men. Her pioneering spirit and tenacity established the annual GIA Jewelry Career Fairs for GIA students and for tens of thousands of industry professionals looking for knowledge, development and advancement within the gem and jewelry industry. Millions of consumers across the world have confidence in their gem and jewelry purchases because she had the insight and drive to reach them with independent, credible and research-based knowledge about diamonds, colored stones and pearls.”

Kimmel played a key role in shaping the Institute’s domestic and international marketing, public relations, and communications outreach efforts. She steered the launch of GIA’s digital presence with consumer and trade focused websites designed to offer valuable, dynamic and interactive content, including her most visible achievement: developing the Institute’s ongoing consumer outreach campaign to help consumers understand the 4Cs of Diamond Quality and the importance of GIA’s independent gem identification and grading reports to trust their purchases.

Kimmel founded the famed GIA Jewelry Career Fair in 1991, which in the subsequent 28 years has expanded from the original event in California (now in Carlsbad), to India, Las Vegas, London, and New York. That same year, Kimmel became the co-chair of GIA’s International Gemological Symposium, and was the driving force behind six Symposia since, including the most recent one, held last October at GIA’s headquarters in Carlsbad.

“My heart will forever be with the students – seeing them study at GIA, coming to GIA’s Jewelry Career Fair and becoming industry leaders has been one of the most rewarding parts of my job,” said Kimmel.

Kimmel also has won broad acclaim for her many contributions to the industry. She received the AGS Distinguished Service Award, the GIA Richard T. Liddicoat Award for Distinguished Achievement, the 24 Karat Club Excellence in Service Award, the WJA Award for Excellence in Promotion, and the AGS Triple Zero Award, and was inducted into the WJA Hall of Fame. Outside the industry, she is a recipient of YWCA’s Tribute to Women and Industry (TWIN) award.

Prior to joining GIA, Kimmel acquired a broad range of experience in many jewelry industry sectors: in retail, as managing director of Anthony Geml Jewelers in southern California; in manufacturing, as customer service manager and vice president of marketing and sales for Nova Stylings, the award-winning design and manufacturing company. She is a founding member and served on the national board of the Women’s Jewelry Association for 20 years, and is past president of the Los Angeles Chapter. She also served on the national board of the Jewelry Industry Council and the board of the 24 Karat Club of Southern California.

Sales Down For De Beers, Tiffany

Separately, De Beers' Cycle 7 rough diamond sales edged up slightly from Cycle 6, but remain almost 50% lower than the same period last year. Provisional figures for the period are $280 million in sales, up from $250 million in Cycle 6. Cycle 7 sales in 2018 were $503 million.

Next article:
Three Big Jewelry Trends To Put On Your Radar Screen Now