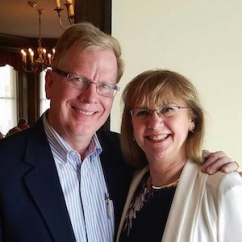 Sioux City, IA—George Thorpe was one of a popular breed of independent family jewelers: the kind who never wanted to retire. He reportedly would even go to meet incoming trains at midnight in hopes of selling pocket watches to debarking passengers, and he worked literally up until the day he died in 1950, at age 87.

His great-grandson Rusty Clark, however, doesn’t want to do that. And because Rusty belongs to another increasingly common breed of independent family jeweler—those whose children don’t want to take over the business—he and his wife, Karen, made the emotional decision to close the family’s 120-year-old store, Thorpe and Company, and retire at the end of the year. Image: Rusty and Karen Clark.

“I don’t want to go from the store to the mortuary,” he told the Sioux City Journal on Sunday. Clark is the fourth generation of the Thorpe-Clark family to run the store, which is not only the oldest jeweler but the oldest retailer in Sioux City.

COVID-19 played no role in Clark’s decision to retire, he told the paper. Knowing that his children were pursuing careers outside the industry, he and Karen began planning for retirement two years ago—long before the pandemic threw retail of all kinds into havoc—and they had finalized the decision last year. Still, it’s not easy, he says, especially as business has remained strong through the pandemic.

"When you realize the ramifications of that decision, and the respect that I have for my customers and for my employees, it was an extremely, extremely difficult decision," he said. "And I thought once I revealed it to everybody, it would be easier. It's even harder. The emotional roller-coaster, the downs are far surpassing the ups right now. I’m happy and sad to say, we’re going out on top,” he told the Journal.