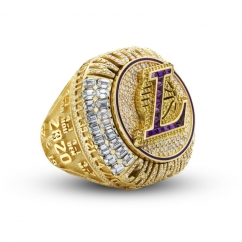 Los Angeles, CA—Jeweler Jason Arasheben, owner of Jason of Beverly Hills, got an extremely prestigious assignment last year: he was tapped to make the championship rings for each member of the Los Angeles Lakers basketball team after the team won the 2020 NBA championship against the Miami Heat. Image: Los Angeles Times

As explained in this article in the Los Angeles Times, Arasheben has a well-known celebrity clientele, and he’s worked with the Lakers before—as well as the Golden State Warriors and baseball’s Los Angeles Dodgers—so it’s not that unusual that he was called upon to create the team rings this year.

But as everyone knows, 2020 wasn’t an ordinary year for anyone, the Lakers included. Like all good jewelers, Arasheben knows the power of jewelry to tell a story.

As the article explains, the tradition of team championship rings started in 1922 after the New York Giants (now the San Francisco Giants) defeated the New York Yankees in the World Series. Prior to then, the winning team players would receive a pocket watch or watch fob or medallion, but as wristwatches were becoming more popular, pocket watches were falling out of favor in fashion, so the ring became the preferred souvenir of a season well played.

The early ones were relatively simple affairs—gold, a diamond, and perhaps the year of the championship, says the Times. Soon they resembled something more like a high school class ring. In the late 1960s, legendary Green Bay Packers coach Vince Lombardi added the crown from his family crest to the team ring, and from the late 1970s, championship rings got bigger and bling-ier every year, incorporating symbols to tell the team story. The Lakers’ 2020 rings are comprised of 180 grams of 14k gold with 804 stones each, and more than 15 special symbols and features.

Although Arabeshen told the Timesthe trend is “getting to the point where you’re just going to give the players a diamond plate” to fit in all the symbols and personalization that team members want, he’s renowned for his ability to do it, with things like reversible faces (which he did for the Warriors) and using every available bit of ring real estate to bring the team’s story to life.

2020’s Lakers had plenty of story to tell. Most tragically, of course, was the death of Kobe Bryant, the retired Lakers legend who perished in a helicopter crash in January, along with his 13-year-old daughter Gianna and a coterie of friends heading to a teen basketball tournament. The team had barely adjusted to the shock of Bryant’s tragic death when the coronavirus pandemic exploded and the season abruptly halted. Then there were the George Floyd protests and the contentious presidential election, both of which drew many professional athletes’ involvement, including the Lakers’ LeBron James. Arabeshen captured them all, along with the usual things you’d expect in a team championship ring like, say, the team logo, the player’s jersey number, and the year.

“It was like a puzzle,” Arasheben says. “We had to be creative in how we built things in,” he told the paper. 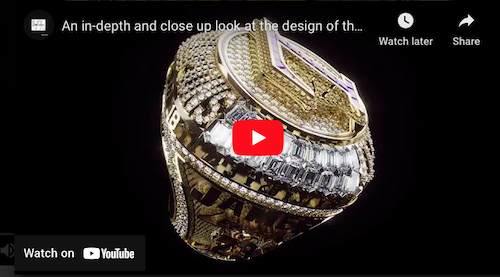