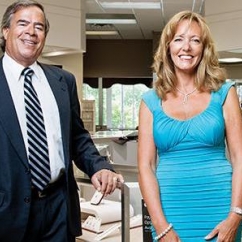 Waterville, ME—Jeff Corey of Day’s Jewelers, a eight-store chain based in Waterville, ME, was recently interviewed by The Hill, an online news website covering Congress and the United States government. Image: Jeff and Kathy Corey of Day's Jewelers.

Corey was quoted in an article about the tough re-election battle facing Maine Sen. Susan Collins. Collins, a four-term Republican, is polling slightly behind her Democratic challenger, Sara Gideon, a longtime state legislator. By contrast, Collins polled well ahead of challengers throughout her last two re-election campaigns in 2014 and 2008, and won both races handily.

Corey, who hails from the same hometown as Collins—Caribou—and whose parents went to high school with hers, expressed some surprise that this race is so close. He says Collins has been very supportive of Maine’s industries, ranging from lobster to blueberries, and has been very popular with Maine voters of all persuasions. He himself has crossed the aisle to vote for her.

“She is just such a respected senator. She's spoken for the state of Maine; she's brought so much to our state over the years, And, you know, especially during these times where she's known as the most bipartisan senator in the U.S. Senate, I would think that she would be ahead by a wide wide margin,” Corey told The Hill.