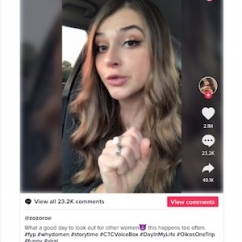 Washington, DC—Jewelers, raise your hand if you’ve ever sold a gift knowing it was going to a customer’s paramour, not their spouse?

Thanks to an intentional outing, one fellow is not going to have a very happy anniversary. Instead, he’s got some 'splainin’ to do. In this “sorry, not sorry!” TikTok video, Zoe Roe (image), a sales associate at an unnamed jewelry store, details the “mixup.” A customer came in to buy a 10-year anniversary gift for his wife, and after completing the transaction, Roe did what every good salesperson should and went for the add-on sale.

Yes, the customer did want to buy something else: a one-year anniversary gift for his girlfriend, using a different credit card and creating a different store account. Roe guided him through that process, then wrapped, bagged, and tagged both gifts neatly. A discreet initial on the bottom of the bags was meant to identify which was the wife’s gift and which was the girlfriend’s gift. Except Roe accidentally on purpose put the wrong initials on the bags.

“I just remembered that his wife’s name is Laura and his girlfriend’s name is Kristin. I must have mixed up the bags. Oops.” says Roe.

“What a good day to look out for other women. This happens too often,” she wrote on her TikTok page.

Separately, TMZ reports that a fictional jewelry-store robbery scene being filmed for CBS’ NCIS New Orleans crime drama got a little too real, and two actors and the owner of the jewelry store being “robbed” are now suing the network.

The lawsuit alleges CBS didn’t get the proper permits or alert police or neighboring businesses that they were going to stage and film a guerilla-style robbery in a Louisiana shopping center. Not surprisingly, a nearby merchant called 911 and New Orleans police responded with real weapons drawn.

It's not unheard of for a real jewelry store to be used as a backdrop for filming. Sarah Leonard Jewelers in Westwood, CA, has been used several times for various cable and network TV shows, including for one violent robbery scene (with permits) that took all day to film.

Nothing was damaged or stolen from the NCIS store, but the two actors (not the main stars of the show) and the jewelry store owner are suing the network for damages, claiming that the event was highly traumatizing. The article did not name the store. 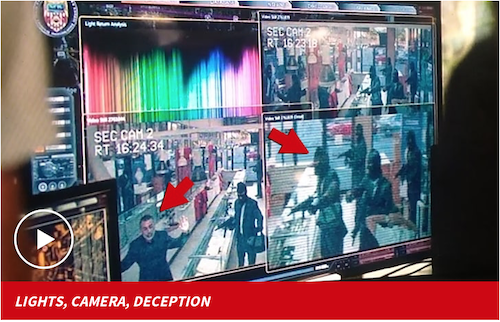 In footage obtained by TMZ, the New Orleans jeweler's security camera shows the NCIS New Orleans scene being filmed. The jewelry store owner, left, and the actors allege the scene was shot without permits or notifying nearby merchants, prompting a real response from police. Image: TMZ

Next article:
Parvin Mayer, Founder & CEO of AFARIN, Passes Away