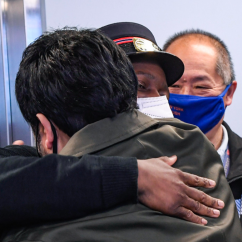 Port Washington, NY--It's a nightmare scenario jewelers everywhere must be vigilant to avoid:

Imagine mistakenly leaving a bag of 30 engagement ring mountings worth $107,000 on your railroad ride home. You were excitedly taking them to show to a customer and distracted by a phone call you left the bag and departed the train. Consider the horror you would feel as you realize you will almost definitely never see these rings again and and that in your case this unisured loss woud be ruinous to your business.

This is exactly what happened to a New York jeweler on Thursday, April 22 on his train ride home. But the goodness of humanity shone down on him in his moment of distress, and the "Gem" of a Conductor on the train took it upon himself to do whatever was necessary to reunite the rightful owner with his rings.

Assistant Conductor Jonathan Yellowday, a Murray Hill, Queens resident, was working on the 6:11 p.m. train from Penn Station to Port Washington when he found the case of jewelry in a plastic bag. The rings belonged to jeweler Ed Eleasian who has an office in Midtown Manhattan. He was on his way home and didn’t realize he had left behind the tray of trinkets.

Conductor Yellowday couldn’t believe what he had discovered and knew that he needed to get the items to the MTA police as soon as possible. “I got on the next train going back to Penn, turned it in, and the rest is history,” he said. 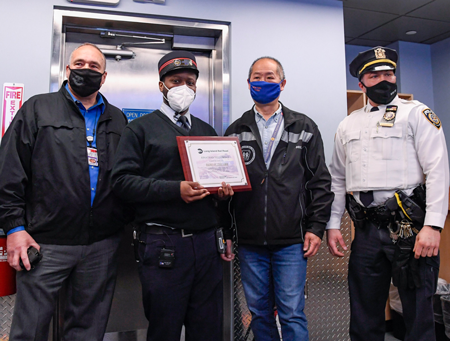 Eleasian and his wife took the LIRR into Penn Station Friday afternoon to retrieve the items at the MTA PD District 4 office in Penn Station. The grateful jeweler was met by LIRR President Phil Eng, Conductor Yellowday, and MTA Board Member and Vice General Chairman of the Sheet Metal Air Rail Transportation Union (SMART) Vincent Tessitore where President Eng presented Yellowday with a commendation for his swift and thoughtful actions.

“Not only did you find and return these 36 rings, but just think about the happiness of 36 couples down the road that will be joined together in happiness, and they’ll have a story to tell,” President Eng said in commending the conductor. “So, thank you for your heroic actions and saving the day for 36 future couples. I understand the value of these diamond rings, but everything found and returned to the customer is immensely important to them. You treated this just as you should have and it’s another proud day for us at the railroad.”

Conductor Yellowday, who has been at Long Island Railroad for seven years, has seen many lost items during his tenure, but nothing close to the value of this find.

After receiving a heartfelt hug from Eleasian today, Conductor Yellowday said, “I could only imagine what you were going through yesterday when you realized that you didn’t have your jewelry. You know when you get on the 6:11 you’re in good hands.”

Previous article:
Did You Miss Sales Strategy for April 23, 2021?

Next article:
Less Than One Year But 100 Million Impressions Later, Natural Diamond Council Is Pushing The Diamond Dream Farther