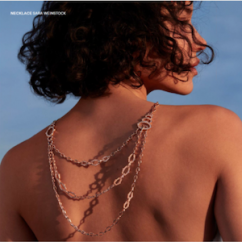 New York, NY—In the 10 months since the Diamond Producers Association rebranded itself as the Natural Diamond Council, 100 million unique visitors to the site are learning more about diamonds. Image: a three-row necklace in gold and diamonds by Sara Weinstock.

“We all know who much content matters in marketing, and we are blessed with content in our industry,” says CEO David Kellie. NDC’s web articles are averaging 150,000 readers each and about 11.5 million people are engaged enough to share NDC’s content on social media.

These metrics are anywhere from 50 to 100 times what the organization was getting 18 months ago, he said in a special presentation highlighting the NDC’s work to date and its trend forecast for fall 2021.

Related: These Are The Top 5 Diamond Jewelry Trends Your Customers Want For Fall

As a veteran of the fashion industry, he’s also pleasantly amazed at the digital numbers. While one might assume the notoriously-slow-to-digitize jewelry industry can’t keep up with fashion, Kellie says it’s the opposite. “The engagement we get in this industry are multiples of what fashion industry gets, so I’m very excited for this industry.”

“When you do things well, understand the digital platform, consumer engagement, and particularly the Millennial audience, it’s amazing. We’re on many different platforms and we’ve really stepped up and mastered how to present content on each platform.” NDC covers everything from celebrity and culture to sustainability or education, and it also has a trade platform much more focused toward the industry, and a lot of educational materials for both consumers and trade.

Jewelers, of course, are most interested in the money NDC spends on generic consumer diamond advertising, trying to rebuild the diamond dream after the decade-long gap left by De Beers’ exit from doing generic diamond advertising. Industry experts widely acknowledged that because no entity could fill the void with the kind of spending De Beers did for decades, a generation of consumers didn’t have a diamond imperative on their cultural radar.

NDC’s current campaign, “For Moments Like No Other,” launched last September, was hugely successful, says North American managing director Kristina Buckely Kayel. This year the campaign evolution will be focused on key moments, with another hero film planned for fall. Shooting will begin next month, and more details will be announced in the summer.

In the marketplace right now is Ana de Armas in a series of ads embracing a newfound freedom (capturing the post-pandemic zeitgeist), and showing de Armas together with her mother for Mother’s Day. “We’re really fortunate to have her as our global ambassador,” says Kayel.

NDC has collaborations and partnerships in the works such as with auction house Christies; it’s with Netflix about some projects, and many more are in the pipeline, adds Kayel.

NDC also launched its Emerging Designer Diamond Initiative last year, which came out of the country’s major awakening to systemic racism and the Black Lives Matter movement following the death of George Floyd.

“We recognize that we are very privileged to be in our industry and most of us got in through some degree of privilege that’s not available to everybody. Without it, it’s very difficult to get into this industry, to have credit or the right connections to buy stones, to get in to see retailers, etc.” says Kellie bluntly. Diversity is good in any industry as it brings in new ideas and perspectives, he continued, but it’s especially critical in a creative industry. “We looked at ourselves as an industry and what could we do to increase diversity in the industry?” 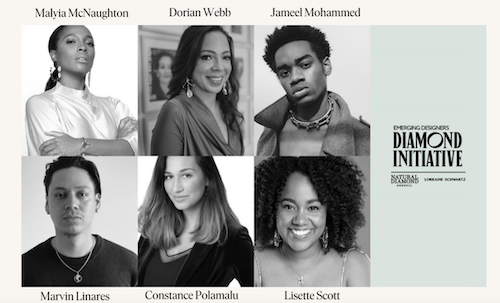 The result, through working with designer Lorraine Schwartz, was to give support to emerging designers of color through a total of $1 million in the form of $20,000 diamond credits. The first six designers in the initiative were named in January.

Finally, NDC is continuing to grow its official Retailer Partner Program, launched earlier this year. “We have a very impactful global ad campaign and are pushing out content 365 days a year, but it’s really the retailers who provide the call to action and deliver diamonds into consumers’ lives,” says Kayel. 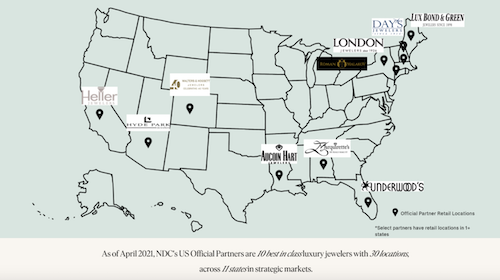 The partnership offers co-op advertising opportunities, social media assets both current and evergreen, educational and e-learning assets, an i-frame embedded in the retailer’s website, various metrics for benchmarking, and much more.

“With the partnership, we offer a lot, and every retailer has their own business strategy so it’s about aligning efforts,” she says.

NDC is focused on the diamond dream. “Ever since last summer, this industry is performing extremely well both in U.S. and China,” said David Kellie. “People wondered if the bubble would burst after the holiday but the industry so far is getting stronger and stronger.”

Kellie said as people emerge post-pandemic, they’re wanting to see and be seen. Because they’ve been in lockdown—and because work attire is more casual—they’re taking going-out times as an opportunity to dress up. The average spend for jewelry is rising, and even those on limited budgets are looking for things they can afford.

“The audience we’re engaging with is a much younger audience and previously thought diamond jewelry somewhat prohibitive. But there are entry points, so they can invest in diamond dream much earlier,” says Kayel.

“We do believe a cultural evolution very in favor of diamonds and diamond jewelry is happening over the next 2-3 years,” Kellie added.