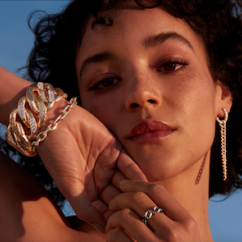 New York, NY—As the world inches closer to putting the pandemic in the rearview mirror, consumers are feeling a new sense of optimism and freedom that’s being reflected in the fashion and jewelry they’re buying.

The Natural Diamond Council on Wednesday released its annual fall diamond jewelry trend report, compiled by the organization’s Style Collective, a group of a half-dozen key influencers and trend observers. NDC creates two trend reports each year; the fall report launches to consumers in late spring and a holiday guide launches in October.

The trends presented in NDC’s report inform the jewelry that is featured as a hero in the consumer ad campaigns, says Kristina Buckley Kayel, NDC’s North American managing director.

“Our numbers ensure those trends are getting in front of a vast audience very engaged in our content,” said Kayel. But it’s not a one-way effort, she emphasized. “It’s there for us to coordinate as an industry and be consistent in communicating and merchandising these trends so they more power and relevancy for the end consumer.”

Jill Newman, Natural Diamond Council’s editor at large, and Marion Fasel, a renowned jewelry author, introduced the 2021 fall report. Newman, the former jewelry editor of The Robb Report, also is a contributor to Town & Country magazine. Fasel, former longtime jewelry editor at InStyle magazine is the founder and editor of The Adventurine.

Newman highlighted the new sense of optimism and celebration driving jewelry design now. In addition to the rest of the Style Collective team, she and Fasel spoke to lots of leaders and influencers, asking what they think the top trends will be culturally. Everyone’s answers overlapped with this sense of optimism, she said. Translating that into jewelry design, these are the key trends:

1. Heavy metal chains. The new iterations are a little softer than the ‘90s rap artists’ chains. While elements of that look still exist, the new designs are a little more feminine and tactile, and especially will feature a touch of diamonds (Top image).

“Tiffany’s HardWear collection looks so fresh and new in rose gold with diamonds,” says Newman. “It takes it from a rocker feeling to something a little more refined and prettier with sparkle.”

The light layered necklaces and charms that have been popular in recent years are still important, she said, but now they’re being integrated with the heavier pieces to elevate the look. “This is about the chain, not the charm.”

“Trends in fine jewelry can be electrifying term for people, because it sounds disposable and like it comes and goes. But a trend in jewelry is when it feels right again, and repetition will bring a trend home for all of us,” added Fasel.

Often asked by jewelers what they should be buying, Fasel encourages them to position the heavier pieces as an investment piece that can be worn day in and day out. It won’t go out of style, she reassures.

She also pointed out that so many of these trends emanate from the fashion runway, which often is costume jewelry but it looks right with the clothes.

“Jewelry stores are selling what’s real and authentic, but it still has to relate to fashion. We’re all wearing it together. Especially now, people are feeling a sense of optimism, going back to offices, going out to dinner again, they want that celebration.”

2. Diamonds and pearls. Fasel says she can’t count how often the industry press has tried to bring back pearls to no avail, but now it’s finally happening. Pearls have been used in fashion as accents and pearls and diamonds are a magical combination of light on light. 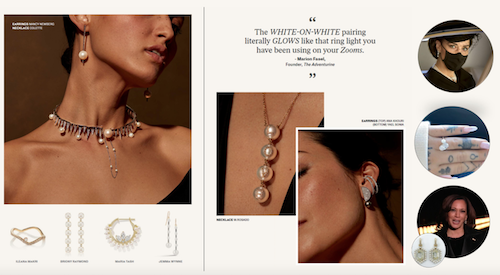 “You might think the combination is prim and proper and in the past it was, but we saw Kate Middleton wearing the Queen’s four strand necklace and the late Princess Diana’s earrings at Prince Philip’s funeral.” She’s worn it before—wore to the Queen and Prince’s 70th anniversary—but when she put it on this weekend it was really eyecatching and reminded everyone of the beauty of the combination, said Fasel. She also highlighted Vice President Kamala Harris wearing beautiful diamond and pearl pieces from Irene Neuwirth, and Ariana Grande’s pearl and diamond engagement ring.

“She’s bringing the diamond and pearl combination to a whole new generation who won’t think of it as prim and proper.”

Related: Why Pearls Will Be Hot

3. The New Hoop. Hoops been around since the dawn of time, said Fasel, but in the past few years they’ve become something to wear for an occasion. She highlighted poet Amanda Gorman wearing them for her reading at President Biden’s inauguration in January. Then Beyoncé wore hoops as formal wear at the Grammy Awards.

It’s about having a wardrobe of hoops, says Newman. Bold hoops can be an investment piece and smaller ones more casual. “We’re seeing ourselves in meetings now on Zoom and realizing how much light it brings to your face in a big hoop.” 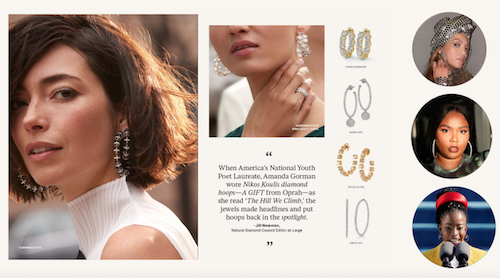 4. Gender-free jewelry. “Gender-free is here to stay. We’re culturally seeing this movement and it’s not going away,” said Newman. It started with celebrities like Justin Bieber and Harry Styles appropriating women’s jewelry but now she says a few watch retailers no longer want to sell watches specifically for men or women, indicating the trend is growing.

Gender-free jewelry tends to be a little more discreet. Newman calls it “live-in jewelry” that you can put on and sleep in and never take off. But some of it is big and bold: in January Boucheron unveiled a gender-free collection with a necklace that can be worn long, as a choker, or as a belt so that a couple can literally share the piece and both wear it.

“By Boucheron doing that, it changes perception and we’re going to see more men in diamonds and in jewelry,” she said.

“If I see a man on the red carpet without a brooch in his lapel, I think he’s not really dressed,” echoed Fasel. She sees this as a real growth area but acknowledges the biggest resistance might be at the retail level.

“That would be a mistake. I remember when there was resistance to selling single earrings. The resistance lasted a long time. Why not welcome men to wear everything they want?” 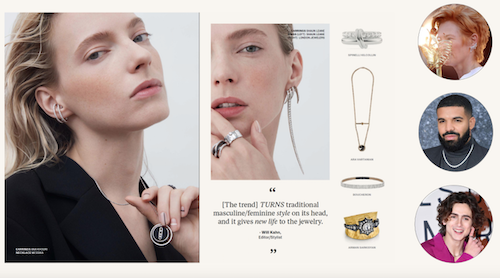 Men are increasingly wearing jewelry that traditionally would be considered women's jewelry. For instance, the sharp sword earring or the hoops at left would be at home in a male ear as well as a female ear.

5. Marquise diamonds. This is the key trend for engagement and commitment rings. “It’s been popular at times but we’ve not seen it so much lately,” says Newman. Now, however, it looks fresh and new. “Everyone wants something unique and individual. When you put on a marquise vertically, it elongates the finger. When you flip it east-west, it has totally different, hip image.

“Like how people wanted to bring in new pearls and it didn’t happen, and then suddenly it did. It’s the same thing,” echoed Fasel. “Brides are saying they want something different and they really mean it. The marquise is there and ready to offer a different look.”

The key, says Newman, is that all the new marquise designs are a little lower set. People want designs they can live in and these lower settings offer that.” 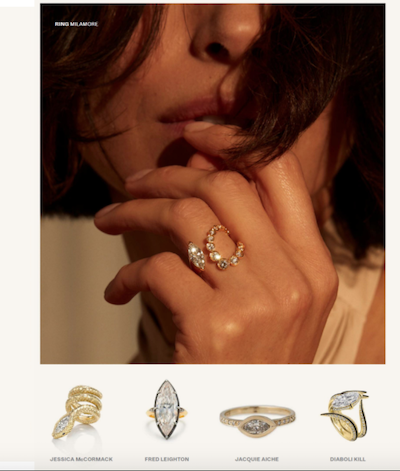 To link to the full trend report, click here.

Next article:
5 Key Learnings To Consider When Speaking To Gifters Vs. Self-Purchasers