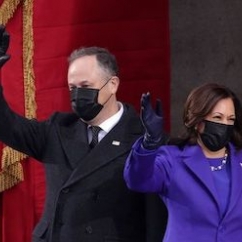 Washington, DC—The Hollywood red carpet is all about diamonds, but pearls rule in politics. Hardly any woman in office is without them. Image: Vice President Kamala Harris and Second Gentleman Doug Emhoff on Inauguration Day. She wore a necklace specially created for the occasion by jewelry designer Wilfredo Rosado. Alex Wong/Getty Images via Town & Country.

Of course, the most famous pearls in power were Jackie Kennedy’s and Barbara Bush’s, although her famous triple strand was faux, by Kenneth Jay Lane. But the tradition dates to the nation’s very founding and Martha Washington’s tiny natural seed pearls (very trendy back in the day). Mary Todd Lincoln wore a Tiffany pearl necklace to her husband’s inaugural ball.

In modern times, First Ladies like Laura Bush and Michelle Obama often donned elegant pearl necklaces for official engagements. In fact, Laura Bush wore an opera-length strand of what appeared to be white or pale silver South Sea pearls to the inauguration. Hillary Clinton, also wore pearls often both as First Lady and while serving in office as a senator and secretary of state.

House Speaker Nancy Pelosi is frequently seen in one of her several signature pearl necklaces: white ones and golden ones, both South Sea, black Tahitians, and a strand of multicolor South Sea and Tahitian ones.

Vice President Kamala Harris is a pearl lover as well, frequently spotted in a strand of black Tahitian pearls or a double strand of white pearls, such as the Irene Neuwirth Akoya/South Sea necklace she wore during the Democratic National Convention.

Pearls are a symbol of Harris’s sorority Alpha Kappa Alpha. According to Town & Country magazine, her team approached designer Wilfredo Rosado to create a special “strong and modern” design for her to wear on Inauguration Day as she made history as the first female and biracial vice president. Rosado created a necklace featuring Australian South Sea pearls that appear to be floating in a sea of 18k white gold links.

Jennifer Lopez, who sang a medley of “This Land Is Your Land” and “America The Beautiful” was decked out in pearls as well. Her white outfit was from Chanel, and her pearl earrings bore the signature double-C Chanel logo. It’s likely the rest of her pearl and diamond jewelry also came from Chanel.

Last, but not least, it was a day for gold, too, from Senator Amy Klobuchar’s quiet on-ear gold curved rectangle earrings to the Nikos Koulis hoop/diamond dangle earrings and birdcage ring by Of Rare Origin worn by Poet Laureate Amanda Gorman. Both were gifts from Oprah Winfrey. 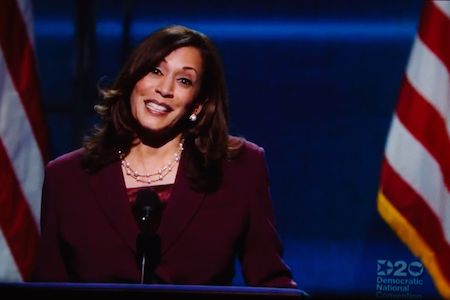 Kamala Harris wore an Irene Neuwirth necklace of South Sea and Akoya pearls for her vice presidential nomination at the Democratic National Convention in August. 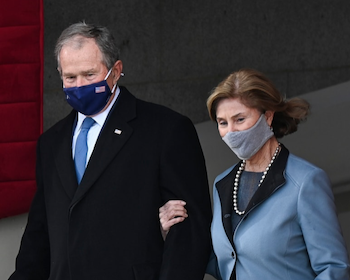 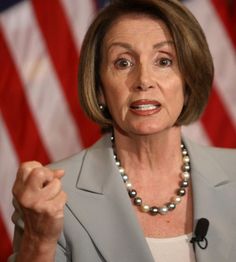 Nancy Pelosi has an entire wardrobe of pearl necklaces. Here, a multicolored South Sea and Tahitian one. Image: Pinterest

Meanwhile, the world has long been fascinated with the timepiece choices of the president of the United States.

Early U.S. presidents, of course, wore pocket watches, not wristwatches, which didn’t come into widespread popularity until after World War I. Since then, however, certain brands of wristwatches have been repeated favorites among U.S. presidents. Leading the pack, unsurprisingly, is Rolex—worn by Dwight Eisenhower, Lyndon Johnson, Ronald Reagan, as well as Donald Trump. John F. Kennedy also owned a gold Rolex but never wore it since it was a gift from Marilyn Monroe.

What kind of watch does President Biden wear? Surprisingly affordable ones: he has been seen sporting an Apple Watch and a Seiko. But he’s got a few pricey pieces as well: he’s a huge fan of Omega, another popular brand among U.S. presidents. The South China Morning Post reports he owns at least four: three different Seamaster models (James Bond’s preferred watch), and at least one Speedmaster, the kind of watch both Neil Armstrong and Buzz Aldrin wore for man’s first steps on the moon. Omega remains NASA’s official timekeeping partner.

Above: President Biden likes his Omegas, but he's also been spotted in an Apple Watch, below. 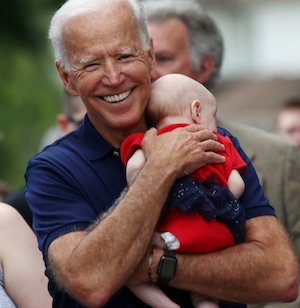 A brand owned by most presidents from Harry Truman forward is the Vulcain Cricket alarm watch, the first watch to be mass-produced with the alarm feature. 11 U.S. presidents since Truman have owned one. 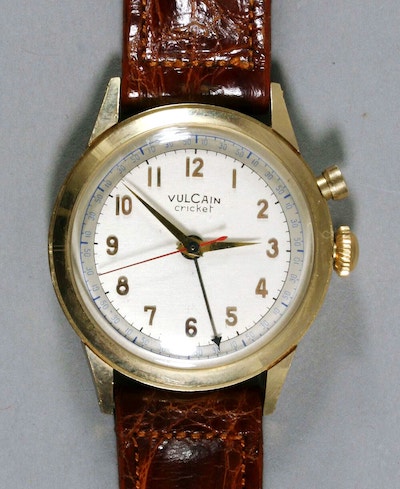 President Truman received his as a gift from the White House News Photographers Association on his last day in office in 1953. The New York Times says it was engraved “One More, Please,” as photographers shout for one last pose. But from Ronald Reagan forward, the watches have been gifted to the American leaders not from the Swiss brand, but from a family-owned jeweler in Finland who had an affinity for America.

In 1988, jeweler Keijo Paajanen, who died in 2019 at age 54, together with his late father Jouko Paajanen, presented one to Reagan at the American Embassy in Helsinki. Since then, Keijo Paajanen presented a Vulcain Cricket to George H.W. Bush, Bill Clinton, Barack Obama, and Donald Trump, as well as to then-vice president Joe Biden in 2011. He also presented them to Gerald Ford and Jimmy Carter, but well after they left office.

Each leader who received a watch from the jeweler wrote a thank-you letter. The collection of signed letters now resides with Rauno Paajanen, Keiko’s brother.

Previous article:
Protect Your Jewelry Store from a Likely 2021 Downtrend

Next article:
Top 7 Ways to Improve Your Local SEO Immediately