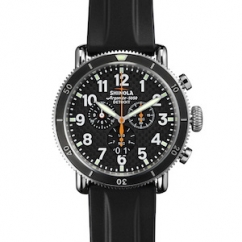 Merrick, NY—In the spirit of the upcoming Baselworld Fair next week, The Centurion Newsletter takes a look at the timepieces that have graced some of the most powerful wrists in the world. Politics aside, what watch does the president of the United States wear?

Our early leaders didn’t wear wristwatches. Though the invention of the wristwatch technically dates back to 1571, for centuries it was a device worn by women, not men. It wasn’t until the latter part of the 19th century that men discovered its usefulness in war, more so than pocket watches. But even then, wristwatches weren’t mass-produced until after World War I, so George Washington, Thomas Jefferson, and their compatriots typically chose simple but good quality gold pocket watches, usually imported from Europe.

By the mid 1800s, Abraham Lincoln wore an American-made Waltham watch, the inexpensive, sturdy “Wm. Ellery” model named for a member of the Continental Congress and signer of the Declaration of Independence, and also worn by many Civil War soldiers. Lincoln’s watch, serial number 67613, was made in 1863.

Though Waltham was based in Massachusetts, a Union state, Lincoln’s choice was more practical than patriotic. The Civil War marked the beginning of an era when American watches were the envy of the Swiss, says an article in WatchTime. American manufacturers had effectively mastered mass production, making their watches less expensive and more precise than their Swiss counterparts.

Jumping ahead to the 20th century, Warren G. Harding, one of 14 U.S. presidents who were Freemasons, was elected in 1920. Though his election coincided with the time when wristwatches were becoming commonplace, he still carried a pocket watch replete with Masonic symbols that contained both Waltham and Swiss movements.

By the time Franklin D. Roosevelt was elected 12 years later, a wristwatch was de rigueur for men to wear. His was a Tiffany & Co. calendar watch with a movement by Movado.

So what’s the most popular watch brand among modern U.S. presidents? Not surprisingly, it’s Rolex. According to Roberta Naas of ATimelyPerspective.com, the Rolex Day-Date, introduced in 1956, was a favorite of Dwight D. Eisenhower, and he switched to it from his Rolex Datejust, thus launching its moniker as “the President’s Watch.” But prior to that, Ike had picked up a steel Heuer chronograph while stationed in Germany during WWII. (Heuer is the forerunner to TAG Heuer). 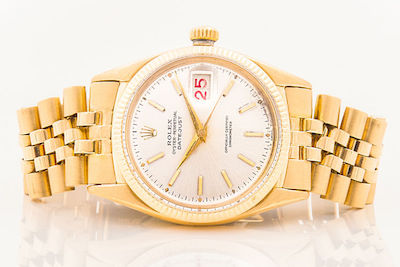 Lyndon Johnson and Ronald Reagan also wore Rolexes; LBJ was said to have gifted them to his good friends as well. Meanwhile, Ike, like his predecessor Harry Truman, also wore a Vulcain Cricket alarm watch, as did LBJ and Richard Nixon both.

And what watch is favored by Barack Obama? Renowned for being athletic and fit, it’s no surprise he’s a lover of sport and smart watches and when he was spotted wearing a $249 Fitbit Surge, the brand tweeted it (below). Prior to that, he was often spotted in a New Balance N7 sports watch and a Highgear Enduro sports watch. 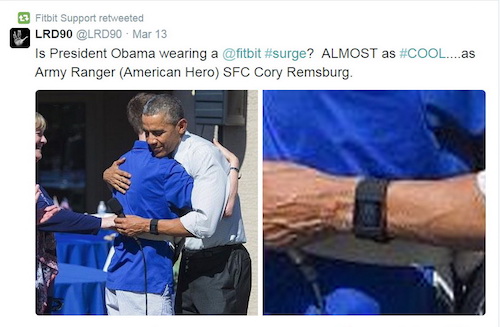 But he’s also a fan of more classic watches, albeit lower-priced ones than Rolex. Originally, one of the most-photographed watches on his wrist was a TAG Heuer Series 1500 Two-Tone Diver, but more often he’s shown wearing a special private label watch manufactured for the Secret Service store by Jorg Gray, and both he and former president Bill Clinton proudly own Shinola watches, the Detroit-built brand making news for bringing jobs to that beleaguered city. In keeping with his preference for sport watches, Obama wears a Shinola Runwell Sport Chrono. 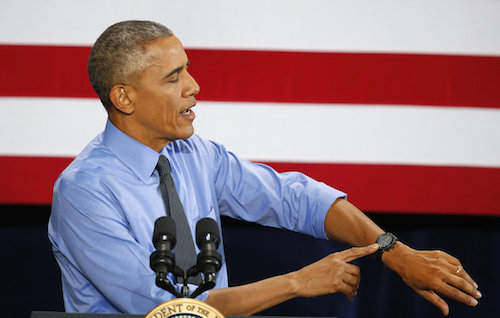 President Obama points to his Shinola watch while speaking at the United Auto Workers-General Motors Center for Human Resources, Wednesday, Jan. 20, 2016 in Detroit. (Image: Huffington Post)  A Shinola Runwell Chrono version similar to the one he's wearing is shown at top of page.

Meanwhile, having the president as a fan catapulted Jorg Gray into a full-fledged watch brand from its origins as Logomark, a California-based supplier of corporate logo products. The watch Obama wears appears in the Jorg Gray online catalog as the JGC6500 Chronograph. It’s offered in 10 different versions retailing from $395 to $895. 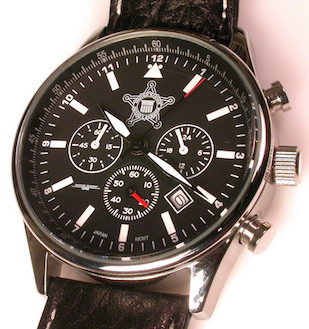 Then there’s the list of too-scandalous-to-wear presidential watches, headlined again by Rolex. Marilyn Monroe gave John F. Kennedy an engraved gold Rolex, which he quickly dispatched to an aide with orders to get rid of it. He continued to proudly wear the Cartier watch given him by his wife Jacqueline, though he wore an Omega on his inauguration day and he also had been gifted a Pennsylvania-built Hamilton from the then-governor of that state. The infamous gold Rolex, meanwhile, was sold at auction in 2005. 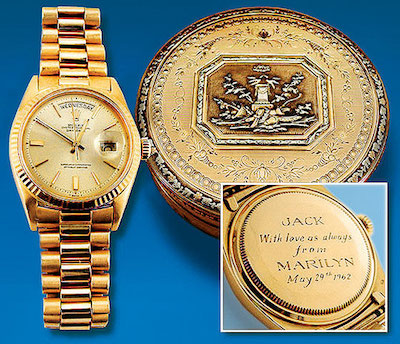 Richard Nixon probably should have just kept the number-one watch he was offered from the limited edition Omega Speedsters collection created in honor of the Apollo 11 moon landing. Instead, being on the right side of the wrong issue, he refused the watch because its value exceeded what he was allowed to keep as a gift.

Lastly, Bill Clinton was only ever seen wearing a humble Timex Ironman while in office, but he’s become quite an avid watch collector since. He’s been spotted wearing, in addition to Shinola: Panerai, Franck Mueller, Cartier, and other highly coveted brands.

But as election season heats up, jewelers everywhere will want to know: What watch will our 45th president wear?