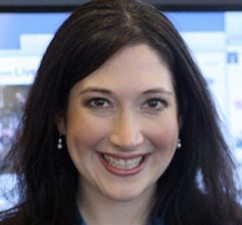 New York, NY—Randi Zuckerberg, who helped her famous brother Mark catapult Facebook from a dorm room project into a global phenomenon, shared some of her insights on success recently. She also listed her view of the top social media outlets for jewelry.

This is Zuckerberg’s second address to the jewelry industry; she was a keynote speaker for the Centurion Scottsdale show in 2012. Now, speaking at the 2016 In The Know conference sponsored by the Women’s Jewelry Association, Zuckerberg told the audience that often success comes from taking the road you didn’t plan to take. After graduating from Harvard, she began her career at the famed Madison Avenue ad agency Ogilvy & Mather, where she was assigned to the digital and interactive marketing team.

“I cried. All my friends were landing celebrity accounts and I wanted to be on one too,” she said. But two years later, while her friends were still getting lattes for TV reality stars, Zuckerberg was leading a team in a growing field.

That’s when her brother called and said, “I have this little project called ‘The Facebook’ and I need your skills in marketing.

“Translation: I need someone to work for free. I said I would never go to work for my brother’s stupid little company in the suburbs of California,” said Zuckerberg. But Mark sent her a plane ticket to Silicon Valley and the rest, as they say, is history.

“It was super not-glamorous—it was all these dudes in this house. But what was incredible was seeing those guys' passion. You could see they were changing the world and changing how we communicate. It was so exciting and intoxicating, I knew I could never go back to corporate world,” she said.

At the time, Facebook was breaking into a world dominated by MySpace and Friendster, so the strategy was to launch with a little bit of exclusivity and use people’s real identities, which at the time was unheard of.

“We know what happens when you use a fake name online—people behave in a way they never would otherwise. We required real names.” It was a novel idea, but as Zuckerberg pointed out, “If 12 years ago you would have said, ‘you're going to pay to get into a stranger's car...’"

But more than that, Facebook developed a fun company culture. We wanted everyone to feel like they were a hacker—a point of pride in the tech community.

The company held Hackathons every month. Every employee invited to pull all-nighter at office—with DJ's, food trucks, etc., but the rule was that everyone had to work on a passion project, not their regular job.

Most, said Zuckerberg, were pretty stupid. But what it did was totally erase the fear of doing something stupid or silly, and it’s amazing what happens when you erase the fear of failure inside a company. People become really creative. Zuckerberg herself—having always yearned for a career in entertainment—made  an 80’s cover band with Facebook employees. She also introduced a special video series, “Inside Facebook Live With Randi Zuckerberg.”

Zuckerberg’s initial reaction was, “Oh, crap! This isn’t even a real show!” But she paused and asked herself what would her male colleagues do in the same situation? They’d find a way make it happen, and that’s exactly what she did. “We gathered resources and made it happen, and she announced her world tour. Now 1.5 billion people can see Facebook Live.”

Zuckerberg next addressed what she sees as the top five social media platforms. Number one on her list, ironically, was not Facebook but YouTube. “There’s no better way to tell a story than video; if you're introducing new product, press release, whatever. The number-one YouTube video, incidentally, is how to put together a baby stroller.

Facebook was her number-two. “What I love for businesses is that you can almost become your own media company inside Facebook. Recently I heard Vin Diesel speak—he gets part of the marketing budget for movies he makes because of social media.

Number three was LinkedIn, which people often overlook. Number four, she said, is Instagram, which in her view “was made for this industry! What better than photos of jewelry?” she asked.

Finally, she listed Twitter in her number five slot, and joked about how it originated “from those little guys I was being charitable to and gave an interview on Facebook Live.”

Zuckerberg also addressed top technology trends. First, she joked that in communicating with emojis, we’ve kind of gone back to cave painting. But growing serious, she said the most important trend now is the distinction between entrepreneur and employee.

“In the new workspace, you need that entrepreneurial skill set, whether you’re working for yourself or working in a huge company with a team. You all need to think like entrepreneurs. The new workplace now is creative,” she said.

No matter what size of business, why not host one of your own hackathons? Get your employees to put their devices down and really think creatively.

Another big trend is that the new workplace is mobile. She cited a website called Power To Fly, which matches people who need to work remotely with companies that need remote workers. It’s a tremendous boon for women or any parents, caregivers, etc.

A third trend is everything on demand. In New York now you can get anything you want with the push of a button on an iPhone. We live in a world where you can get basic health care and basic education anywhere in the world if you have an Internet connection.

With social media, companies and people become their own media companies, and influence becomes currency. For example, there’s a hotel in Sydney, Australia, that gives free nights to any guests who have more than 10,000 Instagram followers and post about the hotel. Fashion designer Marc Jacobs gives freebies to fans who tweet to a certain number of followers.

There’s also the rise of 3-D printing, which has the potential to change the consumer marketplace, and drones, which can be used for almost anything.

But, she warned, all these developments are “dot-complicated.” For example, 3-D printing also means consumers can make weapons, drones can be used to capture poachers and save wildlife but they also can kill people, and while you can get almost anything at the touch of a button, you also can ruin your career at the touch of a button by tweeting the wrong thing.

“There’s always a cost to anything, any new innovation. My concern is that we’re creating a Downton Abbey-like society, where everyone is either serving or being served. We need to be mindful as we’re using these services.”

Next article:
The 2016 Presidential Watch(es)