Merrick, NY—A few weeks ago we examined which luxury watch and jewelry brands had the biggest presence on Twitter. Now Luxury Society, in partnership with Digital Luxury Group, has taken a look at how they stack up on the jewelry industry’s most popular social media, Facebook, and on Instagram, which with its focus on the visual, seems tailor-made for jewelers.

As of December 2015, Facebook averages 1.04 billion daily active users and 1.59 billion monthly active users, with a majority being mobile users and, proving that despite the rise of more visual channels like Snapchat and Instagram, Facebook still has impressive global clout. In fact, the majority of its daily users are outside the United States and Canada.

But here we see a huge jump for Blue Nile, which comes in at number five in the top 10 jewelry brand presences on Facebook, moving halfway up the list from the number-10 ranked jewelry presence on Twitter. But it doesn’t show up at all among the top 10 jewelry brands with a presence on Instagram. Blue Nile’s engagement rate on Facebook is the second highest after Italian brand Damiani. 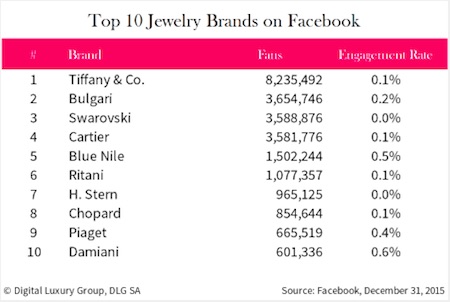 Above, Blue Nile ranks as the number-five jewelry company on Facebook, and is second in customer engagement rate. Below, most of the leading luxury jewelry brands on Instagram sell mainly through their own shops. Charts source: Digital Luxury Group and Luxury Society. 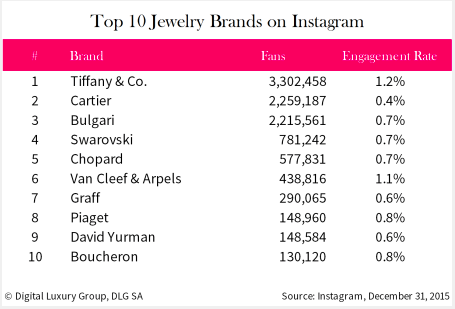 Among watch brands, Rolex leads on Facebook and it also has the highest engagement rate among the top 10 watch brands—tying with Damiani for jewelry—but it doesn’t even show up in the Top 10 on Instagram. There, Cartier ranks number one. (Chart: Luxury Society/Digital Luxury Group) 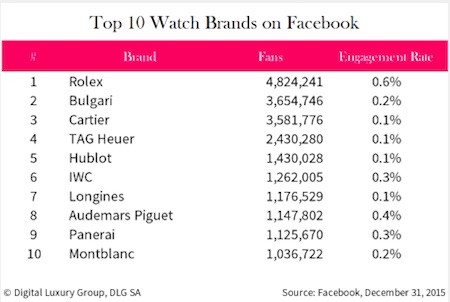 Next article:
Randi Zuckerberg: Creativity And Social Media Will Shape The Future Workplace