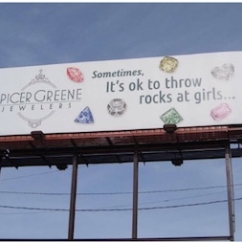 Asheville, NC—That awkward moment when you realize it didn't come out the way you planned: a billboard meant to be humorous backfired in a big way for Spicer Greene Jewelers last week. The billboard, near Interstate 240 in Asheville, featured pictures of gemstones with the tagline “Sometimes, it’s ok to throw rocks at girls.”

But not everyone found it funny. Opponents blasted it in social media as both sexist and encouraging violence against women, and as social media is wont to do, it went viral. On Sunday about 15 protesters with signs picketed the store, multiple news outlets across the country picked it up (including CNN, the Huffington Post and the Washington Post) and even Canadian news and the UK’s Daily Mail picked it up. Chelsea Clinton weighed in on Twitter, while other women’s rights activists called for the board’s immediate removal.

Jewelers and co-owners Elliot and Eva-Michelle Spicer posted an immediate apology and mea culpa on the store’s Facebook page (below) and in multiple media interviews expressed remorse that the ad was taken out of context as a play on once-common playground behavior. The store donated 10% of its weekend sales to Helpmate, a local organization dedicated to helping victims of domestic violence.

And as these things also are wont to do in today’s politically-charged climate, the controversy ignited controversy of its own: at press time, the store had received more than 1,000 comments on its Facebook apology post. Most were supportive of the billboard but many also were highly derisive of those who found it offensive.

Still, the publicity has had an upside: Elliot Spicer said in a Monday Facebook comment that “crazy amounts of people have been calling in with support” and the store has sold a lot because of it. At press time, a store associate told The Centurion the phones have still been busy even a week later.

Update: The Centurion spoke to Eva-Michelle Spicer after this edition went to press. She confirmed the majority of comments the store has recevied have been supportive, and in fact sales have rocketed since the story broke. "We've sold things to people all over the country. They wanted to buy something to support us," she told The Centurion. "Other than the time-suck [of dealing with the situation], business is great!" Still, she acknowledges, it's been personally tough knowing that critics assume the store is a male-run business when in fact it's a husband-and-wife partnership.

The billboard, meanwhile, will remain up for the time being. The Spicers moved up the schedule for their next ad rotation, but they also have to work with the billboard company's schedule so it won't be immediately, she says.