New York, NY—As consumer demand continues to shift and the jewelry industry struggles to keep pace, what is important and what is no longer relevant to drive consumers to purchase fine jewelry? (Left: An image from Forevermark's Tribute Collection.)

Jean Poh: Jewelry existed before currency. Why do you think that is? Is it desire or need?

Ben Smithee: Jewelry is a social currency. Social currency has always existed, long before formal currency. It satisfies a human need, an emotional need. As a marketer, a dream industry to work in is something that nobody needs but everybody wants, so if we can create demand increasingly, then we survive and grow and thrive.

Hannah Becker: Humans have a biological need to look at light. We’re physically drawn to it. The reason jewelry and gems existed before currency is because it has the sparkle that speaks to something we don’t have words for.

Jeff Skaret: What drives jewelry acquisition over thousands of years is the visceral desire to represent something meaningful in one’s life. That’s the primary motivation for the business we’re in. We can do all the great marketing and tug at emotional strings, but until that connection is made, that’s what really drives the motivation for jewelry.

Elle Hill: What defines a need? Is it food, water, shelter? There’s also work and love, and the need to have a happy life, as opposed to just exist. Everyone wants to express who they are; their personal style, morals, beliefs, et cetera. That need to express yourself is a human need. Maybe not a survival need, but a human need. My jewelry shows who I am.

Sarah Gorvitz: I didn’t understand the power of fine jewelry till I had kids. When I first became a mom and felt an innate, intrinsic need to express love and devotion to my kids, it was then that the power of a diamond took on an entirely different meaning for me. Diamonds play an emotional role in the family, in the relationship of showing love to my kids. 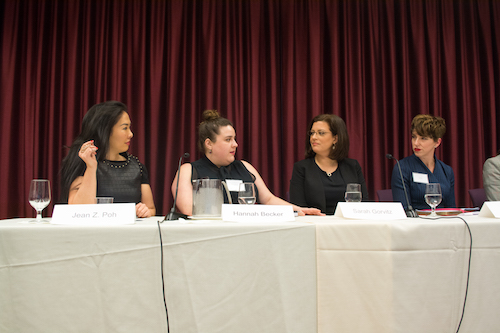 Jean Poh: I’m hearing that jewelry itself not a need but there is a need to express oneself, and jewelry is that platform.  How do we accomplish that in marketing?

Tracy Matthews: There’s a huge Millennial base in San Francisco, and they all tell their friends who they buy from. Getting that referral is so important. We asked them to share stories about how they got engaged and what they love about their partner, creating unique campaigns where customers can share the story of your brand and their perception of what you stand for.

Jean Poh: Is there a difference in how you approach that customer today?

Ben Smithee: 10 years ago, if you were going to some sort of event where you had to buy a gift, how long before the occasion did you buy the gift? Now think about the most recent time—I bet you bought the gift on the way to the event, or donated to a GoFundMe page to send a couple to Tahiti.

Fundamental shift on how we market has changed, before you get into the messaging or anything else. Marketing used to prep for the moment of need but today that moment is right now. It’s marketing in the moment, not for the moment. If you’re not at the top of the [search] feed, you don’t exist.

Jeff Skaret: It’s an omnichannel experience. The online presence isn’t going away, it’s accelerating, though maybe not to the degree we all feared. What [De Beers research] has seen over last five years is that 82% of all diamonds sold are still sold in brick-and-mortar stores. That’s only down 1% from 83% five years ago.

Omnichannel means to meet the consumer wherever, whenever, and however they are. Finding ways for consumers to engage with your product and make it their own is critical to our industry. We still do look for people and connections where we can trumpet our presence. We can’t do it on our own, we require a lot of third party endorsement. It’s a way to bond with people with similar core values and standards.

Sarah Gorvitz: The Millennial generation will spend up to seven hours researching a product before buying it. The age of people only wanting to hear what a celebrity says is over.

Consumers can get ton of info around the four Cs and valuing diamonds, but where [the industry] shows softness are the things that are important but not so obvious in the value chain. For many people, a diamond is the oldest thing they will own. Another thing we focus on is rarity, one of least well understood aspects of diamonds. Why so expensive? They get it when we help them understand what it takes to bring them to the [earth’s] surface.

Elle Hill: One of problems is that the industry is so highly fragmented. It lags the fashion industry by 25 years or so in terms of branding. We’re nepotistic; we’ve got tiny little things with high value so we only want to work with people we know, and so on. It’s also not just retail to the end consumer, it’s supplier to retailer, rough diamonds and other groups further up the supply chain. 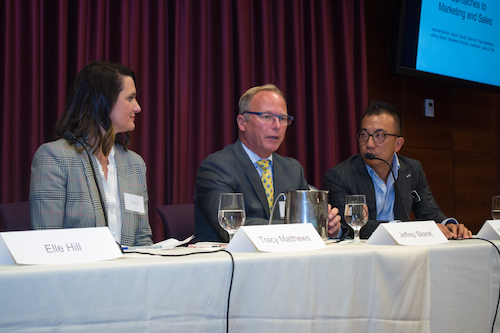 Jean Poh: Is blockchain adding that value to diamonds and jewelry?

Ben Smithee: People are scared of it and want to push it away. Remember I used to talk about social media marketing and people thought it was a fad! [Blockchain] is not something consumers are going to see as this new thing, it’s just going to be a new standard of excellence. All the players that have been hidden in the spaces will have to deal with public limelight, but it gives a whole new opportunity to tell a story.

Jeff Skaret: Not necessarily. Blockchain is going to be an industry-managed process, not every key turned on for every transaction. Some of the fear is that every transaction and every statement or invoice is exposed, and that’s not the case.

Tracy Matthews: A recent podcast featured Mark Hanna of Richline and designer Jennifer Dawes.  Mark was talking about blockchain and sourcing from mine to consumer, Jennifer was talking about how to use blockchain to create a story.  What’s the origin, how can people feel good about purchases, etc.

Ronnie Vanderlinden (from the audience): The largest inventory in world is in the hands of the consumer. When a consumer comes back to sell a diamond, is that going to render a stone much less valuable if it doesn’t have provenance? We also have to think about gazillions of carats of melee. If you talk to those developing for blockchain, there’s still lot of building going on.

Jean Poh: From my experience in dealing with younger consumers, if it’s been in the marketplace for any length of time, while that doesn’t change the ethics of how it came to be, it’s been scrubbed of its initial bad ethics. It just feels better. There’s some morality over the unknown; at least they know they’re not mining new.

Elle Hill: That’s why old mine and rose cuts are so important. But how is this affecting the consumer’s journey? Everything that we do and talk about as an industry, I worry we’re navel gazing a bit. How is this helping move the consumer along on that journey? That’s where we need to put our time and money.