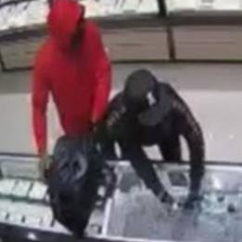 Katy, TX, Brooklyn, NY--On June 4 during a robbery at a jewelry store in Katy, TX, a store employee fired three shots at the suspects (shown left), causing them to flee, leaving some of their take behind. On June 7, a jeweler in Brooklyn, NY was getting back into his car after visiting customers with jewelry in a backpack when a lone male suspect jumped into his passenger seat, threatened to shoot him and took his jewelry.

Below are details of these two robberies provided by Jewelers Security Alliance (JSA):

Shortly after 7:00 p.m. two male suspects wearing hoodies, masks and gloves entered a mall jewelry store. One suspect had a nail gun, and used it to shatter a showcase. The suspects began to put merchandise into a duffel bag, but an employee of the store fired three shots at them from a handgun.

See a video of the chaotic scene in the mall with shoppers running in panic when shots were fired: https://news.centurionjewelry.com/videos/detail/mall-panic-after-katy-tx-jewelry-store-employee-fires-shots-at-robbery-suspects

The suspects fled with merchandise in the duffel bag, much of which fell out near the entrance to the store. The men fled in a white Mercedes or BMW which was later identified as stolen. If you have information, contact JSA at 212-687-0328 or jsa2@jewelerssecurity.org.

1. Jewelers firing a gun during a robbery can result in tragedy, including deadly retaliatory fire, or stray bullets hitting employees, customers or passers by.

2. Showcases with burglary resistant glass can withstand many blows from a hammer or tool, and often cause robbers to leave empty handed.

3. Surveillance cameras placed high and focusing down often capture only the top of the heads of criminals. Have cameras focused at eye level to obtain good photos for identification.

A jeweler carrying merchandise in a backpack and visiting a client made several additional stops. As he got back into his car at 5:00 p.m. in the Sheepshead Bay neighborhood, a lone black male jumped into the passenger seat of his car. The suspect threatened to shoot the jeweler and then bound his hands and feet and taped his mouth shut.

The robber took a bag containing diamonds, gold and cash, and sprayed the victim in the face with a pepper spray like substance. If you have information, contact NYPD Major Case Squad Detective Giuseppe Gluca at 718-265-7353, or JSA at 212-687-0328 or jsa2@jewelerssecurity.org.