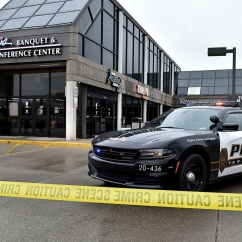 Terre Haute, IN--A jewelry store owner was arrested for firing shots at suspects fleeing his store after a robbery attempt.

A news report about the incident at The Meadows shopping center stated that the police arrested the store owner Darrell Bemis, 72, for criminal recklessness. Bemis had chased the suspects and fired multiple shots from his handgun.

According to the Terre Haute Police Department's Facebook post, the suspect "fled outside the store and met up with another male and began to run from the Meadows."

A witness —owner Joe Walton of the Just Another Kind of World kiosk in the same shopping center — told Tribune-Star that he saw a male suspect in his 20s, wearing a white hoodie and running out of the shopping mall with a black jacket wrapped around a large object. Walton added that he chased down the suspect, who threw down a display case that held gold jewelry and other items. Walton recovered the items and returned them to the store. He also told the outlet that he saw the store owner fire shots toward the fleeing suspect from his handgun.

No one was reported injured in the accident.

Anyone with information on the incident is requested to call the Terre Haute Police Department at (812) 238-1661.

Next article:
Caught on Video: Suspects Pepper Spray Store Employees and Run Away With Jewelry Worth $4,000