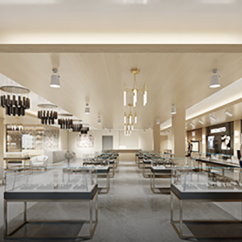 Phoenix, AZ--An assault and robbery incident took place at a jewelry store inside the Mercado de los Cielos at 75th Avenue and Thomas Road, according to a news report.

The incident occurred around 7:30 p.m. when an employee was getting ready to close the store. Two women arrived at the store to purchase something.

“We were there helping them patiently for quite a while,” said Isabel, a store employee, in the news report. “They seemed very friendly and nice.”

After inspecting items for 30 minutes, the two women decided to buy several items. Another store employee, Luz Londono, tried to charge their credits cards for the items, but the cards did not work. Isabel tried to process payment for the second time, and this is when one of the customers — as seen in the video footage — appeared to take out what seemed like a pepper spray bottle from her bag.

The woman raised her hand and sprayed Luz and Isabel with the bottle. With the two store employees now coughing away, the women took the jewelry along with their credit cards and ran away.

The report stated that the two women stole jewelry worth $4,000.

“I panicked because that had never happened to me,” Luz said in the news report. “At no time did they generate mistrust, I [didn’t] suspect that they were not good ladies.”

Read more on the incident and watch the video in the complete news report.

Next article:
I.W. Marks Jewelers to Renovate Landmark Store in Response to Changes in Retail Business