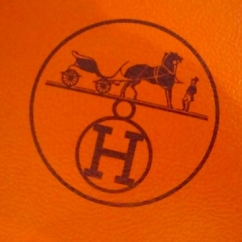 Merrick, NY—Two recent surveys show that jewelry and watches are favorite acquisitions for ultra-affluent consumers worldwide, and that the United States is the market most luxury brands believe has the most growth potential.

According to The Wealth Report, conducted by London-based real estate consultant Knight Frank among 600 private bankers representing 23,000 ultra-high net worth (UHNW) consumers around the world, the rich are indeed getting richer. Three-fourths of bankers surveyed said their clients’ net worth increased in 2013 over 2012, and 65% said their clients feel optimistic about further growth in 2014.

The United States was the only developed nation to make it onto the Wealth Report’s Luxury Opportunity Index, a list of 10 countries with the fastest-growing luxury spending potential. The United States ranked number five of 10. The top three were in the Middle East—Qatar, United Arab Emirates, and Saudi Arabia, respectively. Five African nations, Ghana, Kenya, Nigeria, Zimbabwe, and South Africa, also made the list for their growth potential, and Mexico, at number 10, was the sole representative of Latin America. No European or Asian countries made the list.

Globally, jewelry and watches were among the UHNW’s favorite “investments of passion.” Jewelry ranked number one in places where it’s always been regarded as a store of wealth—Asia, Africa, Latin America, Russia, and the Middle East—but ranked slightly lower in places with a history of more stable currency. It came in at number three in the United States and Australia, and number four in Europe. Overall, according to the Knight Frank Luxury Investment Index, the popularity of jewelry as an investment grew approximately 2% annually from 2004, increased 46% over a five-year period, and 156% over a 10-year period. Watches, meanwhile, grow 4% per year, 32% over five years, and 82% over 10 years. 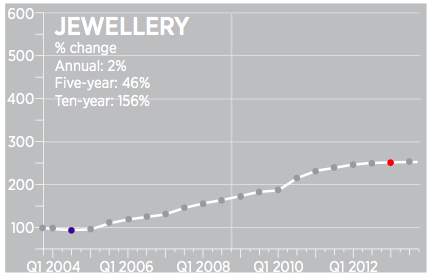 Two charts from the 2014 Knight-Frank Wealth Report show the path of growth for jewelry (top) and watches (bottom) as a passionate investment among ultra-high net worth individuals. 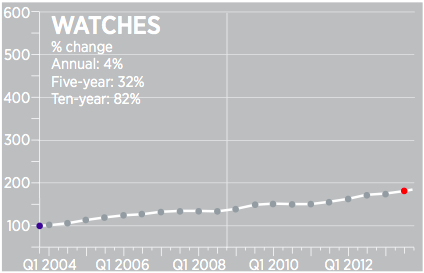 Separately, a report in Women’s Wear Daily finds Europe’s top heritage luxury brands view the United States as the market with the biggest expansion potential. After several years’ of intense focus on China, brands are cooling their infatuation with it and realizing how much opportunity still exists here.

The United States is still the world’s largest luxury market, but its maturity hasn’t dimmed its potential for growth. Executives from such companies as Christian Dior, Hermes, and conglomerate Kering (formerly PPR), plan to open new retail outlets for their various brands here, citing such factors as the strong U.S. stock market, improving economy, growing population, and new wealth creation as reasons why the U.S. is on track to outperform Asia in terms of growth this year.

For example, British designer Victoria Beckham told WWD her strategic focus is on the United States. “It’s a big country. The potential is huge. It is still the number-one luxury market. We don’t realize that because we always think it’s China or wherever else. It is the U.S.”

Indeed, according to a study by Bain & Co. and Italian luxury goods association Fondazione Altagamma, luxury goods sales in the Americas grew 4% in 2013, compared with 2.5% in Mainland China.

And in an address to attendees at Centurion Scottsdale earlier this year, diamond industry guru Martin Rapaport said essentially the same thing: China will be critical to the future of the diamond market but it’s not there yet. He also termed India’s [current diamond market situation as] “a disaster,” leaving the United States as the leading diamond market in the world.

While tourism accounts for a chunk of U.S. luxury sales, says WWD, affluent local clientele in cities all around the United States still provide the firm foundation needed for ongoing growth around the country, say executives.