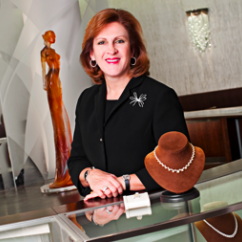 New York, NY--The Jewelers’ Security Alliance (JSA) elected a new slate of officers during its annual luncheon at the New York Yacht Club before an audience of 135 industry and law enforcement leaders. Steven Kaiser, president and CEO of Kennedy North America, a branch of an Australian luxury retail jewelry chain, was re-elected to a three-year term as JSA chairperson. Other JSA Officers elected for three-year terms were: Alan Zimmer, of Reeds Jewelers, as vice chairperson; Mark Udell, of London Jewelers, as secretary; and David Tearle, CFO of GIA, elected as treasurer.

JSA also honored two individuals during the event for their contributions to the safety and security of the jewelry industry. JSA presented the 17th Annual Industry Service Award to Susan M. Jacques, president and CEO of GIA (pictured). In presenting the award, John Kennedy, president of JSA, cited Susan’s strong support for free, in-depth training classes on gemology and the jewelry industry that GIA has been providing to FBI and local law enforcement personnel for many years. Kennedy and two FBI veterans related how these classes have trained hundreds of law enforcement personnel over the years, raising their ability, understanding and interest in jewelry crime.

JSA also presented the 23rd Annual James B. White Award to Law Enforcement to Robert Lanier, a detective with the Miami Beach Police Department. Lanier is a 32 year veteran of the department who has investigated numerous violent jewelry store robberies and attacks on traveling salespersons. He has also led or participated in many RICO cases resulting in the arrests of numerous jewelry criminals. He has worked on assignment in the Miami FBI Office, and has participated in undercover work related to the JIS Shows in Miami Beach. “Lanier has been an important resource for police throughout the U.S. concerning violent jewelry crime in South Florida,” Kennedy said.

Next article:
Webinar Discusses The Bright Future for Brick-and-Mortar Retailers