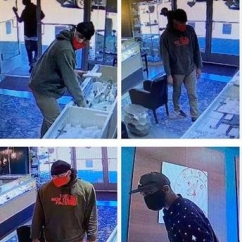 New York, NY—Three recent smash-and-grab robberies at jewelry stores in different states have similar MO’s, says the Jewelers’ Security Alliance. Two incidents took place in Connecticut, in Milford and Trumbull, and one across the country in Bellevue, WA. Some evidence suggests the suspects may be the same.

JSA has issued a list of recommendations and warnings for jewelers to heed in smash-and-grab situations. In particular, it’s a red flag when three or more persons enter a jewelry store together. While it could be perfectly innocent, jewelers are advised to be extra careful in that instance. JSA’s other 10 recommendations:

1. Do not resist in a smash and grab robbery. In addition to sledgehammers and other dangerous tools, the suspects may be armed with guns.

2. Showcases with burglary-resistant, laminated glass and special frames can withstand many blows with a hammer and can prevent or reduce large losses. JSA has not seen robbers take retaliatory action when laminated glass is used and robbers are unable to enter a showcase or are able to take only a small amount of merchandise from a small hole. Furthermore, robbers frequently cut themselves on small holes and leave behind valuable DNA evidence from blood.

4. Keeping the door locked and having buzzers for the door can help to keep out potential robbers.

6. Spreading high-end watch and loose diamond merchandise among several showcases, and not concentrated in one showcase, can reduce the amount of the loss in a smash and grab robbery.

Anyone with information is asked to contact JSA at jsa2@jewelerssecurity.org.

Next article:
Jewelers for Children Rings of Strength Event Goes Virtual; Anyone Can Participate With Any Activity