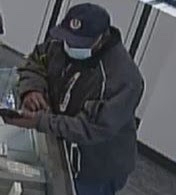 New York, NY—The Jewelers’ Security Alliance warns jewelers that as businesses reopen, thieves are getting back into business as well.

In the Burlington, NC incident, the suspect (shown) was wearing a heavy coat in addition to a protective face mask and hat. When he was shown a $15,000 ring, he grabbed it and ran from the store. In the Ohio incident, five suspects entered the store and looked at multiple pieces with one doing the purchasing. A piece count later turned up several items missing. For more information, or if you have information, contact JSA at jsa2@jewelerssecurity.org.

1. Inappropriate clothing for the season is a red flag that a suspect may be trying to conceal his or her identity, or concealing a sledge hammer or weapon, such as the suspect who wore a heavy, bulky coat in the middle of June in North Carolina. Bulky clothing may also be used for concealing stolen goods or for placing on a showcase to conceal a distraction theft from an open showcase.

2. Using a cell phone or keeping it in hand during a presentation may also be another red flag in some circumstances. Is the suspect preparing to communicate with an accomplice outside the store to see if the getaway is clear?

3. It is a red flag when three or more people enter your store together.

4. Show only one item at a time. Multiple items outside the showcase involving multiple customers can create a confusing situation allowing a theft to occur.

5. Keep showcases locked except when actually taking merchandise out or returning items to the showcase.