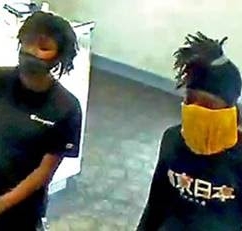 Ocala, FL—Two recent grab-and-run thefts that occurred in jewelry stores in the Ocala, FL area are believed to be related. The latest Jewelers Security Alliance bulletin says that on May 11 at 4:07 p.m. the two suspects pictured were in a retail jewelry store claiming to be looking for a watch or bracelet present for their dad. They left claiming they were calling Dad, and returned asking about diamond rings and bridals. They exited again saying they were going to the bank.

They returned a third time, interrupted a sales associate, and spent 20 minutes looking at rings. As the price of a ring was being finalized, the taller suspect grabbed the ring, and both suspects ran from the store.

One suspect is described as a black male, 18 years old, 6 feet, very thin, with a tattoo on his hand, and long spiky vertical dreadlocks with brown tips, and with a yellow tee shirt pulled up to serve as a mask. The other suspect is described as a black female, 16 to 17 years old, 5 feet 9 inches, very thin, with shoulder length light brown dreadlocks.

A day earlier, on May 10 at 3:15 p.m. two black male suspects were in a retail jewelry store and said they wanted to spend $1,700 on a Mothers’ Day gift. They looked at rings and tennis bracelets. The older suspect said he was leaving the store to get his cell phone to take a picture. Upon his return a ring and a tennis bracelet were placed on a display pad. The younger suspect grabbed the merchandise and both suspects fled.

If you have information about the above incidents, contact JSA at (212) 687-0328, or jsa2@jewelerssecurity.org.

Separately, JSA is pleased to announce that both the suspects in the March 4 robbery of a Richard Mille wristwatch from the wrist of a jeweler dining in a restaurant in Beverly Hills, CA, and the suspects in two armed jewelry store robberies on March 17 and 21 in San Jose, CA, have been arrested. The Beverly Hills watch thieves turned out to be members of the violent Crips gang. The watch remains missing.

Next article:
Retailer Conversation Starter: How Are You Balancing Mask-Vaccination Rules?