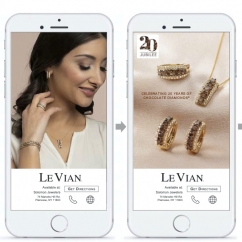 New York, NY—Le Vian is introducing innovative geo-fencing technology this September, devoted to attracting footfall at its independent jewelry retail partners across the United States. The initiative represents Le Vian’s most significant commitment to date to its independent retail division.  Images: four different ads that will pop up in the campaign.

Geo-fencing technology will target Le Vian collectors when they are within a specific mile radius of a participating independent store, by sending them a pop-up digital impression on their smartphone. The advertisement will feature exclusive designs from Le Vian’s Chocolate Diamonds 20th anniversary Jubilee collection, only available to purchase from independent jewelers,

In recent years Le Vian has worked to support its approximately 300 independent retailers by developing an exclusive range of pieces only available at these stores. Geo-fencing is now set to bring this range to a broader, but highly targeted audience. Le Vian also provides its independent retailers with exclusive marketing resources, including branded displays, packaging, and marketing co-op, further supporting them in a crowded market. 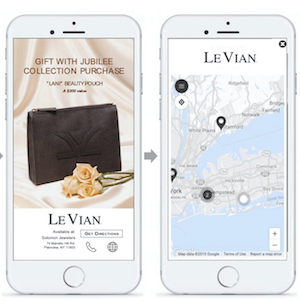 Le Vian will allocate over 100,000 digital impressions to each participating independent store upon purchase of pieces from the exclusive Jubilee range as well as replenishments of beloved Le Vian icons. In addition, Le Vian will provide each store with 10 Le Vian branded purses (retail value $200) to be gifted to the first 10 buyers that come to the store through the geo-fencing campaign and purchase any piece from the exclusive Chocolate Diamonds Le Vian anniversary collection.

To further amplify the impact of this campaign, Le Vian will advertise the Jubilee range on all Le Vian social media channels through October and the remainder of the fall in the run-up to holiday season. 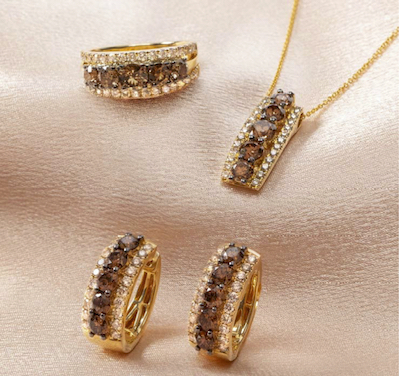 Pieces from the Jubilee range of Chocolate Diamonds jewelry.

Other retail technology innovations from Le Vian include:

Previous article:
Forbes: How The Jewelry Industry Is Mobilizing To Stamp Out Racism