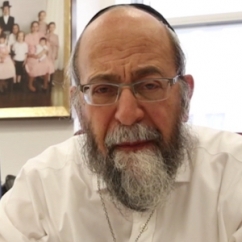 New York, NY—More than 70 years the Holocaust ended, the family of David Weisz & Sons is going back on the lessons their parents learned as survivors and using those lessons to help the entire jewelry industry get back on its feet through the COVID-19 pandemic.

“My parents lost their family and their business. But they never complained about what happened,” says David Weisz Jr., the patriarch of the family business now. “My mother always said you don’t look backward at your suffering and what you lost, you look ahead.”

David Weisz & Sons’ origins go back to Satu Mare, Romania, where the original David Weisz—the current David’s grandfather—was a respected jeweler. As World War II loomed, he realized he was not going to be able to escape to safety, so he gathered all the diamonds from his shop and handed them to a distant cousin about to leave for New York.

“Please keep these safe for me and my family,” he begged. “If we make it out, you’ll have them for us. If none of us survive, they’re yours to keep.”

David, his wife, and family all were deported and most were killed in the Nazi concentration camps. Only one son, Herman, survived by playing dead just as American soldiers arrived to liberate the Buchenwald camp. An American soldier gently lifted him and, upon seeing he was alive, fed him a bit of a chocolate bar.

That first bit of human kindness after years of torture was the beginning of Herman’s lifelong love and dedication to all things American. After the war, he made his way to New York City, where he was reunited with his grandfather, who fortuitously had been visiting before the war and stranded here.

And one day, quite by accident, Herman met his distant cousin on the street. They began talking and realized who each other was. The cousin, Marvin, handed over the bag of diamonds to Herman. Those diamonds remain in the bag in David Weisz’s safe to this day, a legacy never to be sold. 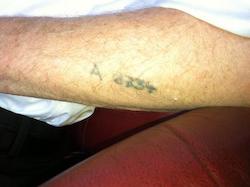 Unlike many Holocaust survivors, Herman Weisz chose to keep the number tattooed on his arm in the concentration camp. It serves as a reminder to look forward.

In a powerful new video, titled SURVIVE! and produced by the company, David Weisz Jr. tells the story of his parents. “They had the numbers (tattoos) on their arms, which they refused to take off. They wanted to show us, even with all of that suffering, we’ll come out a lot better and stronger than before.”

The key is by concentrating on helping others, says David. “By helping others, you get motivated and automatically you help yourself.” He drove that lesson home to his sons, Yoely and Zisha. Both are volunteers for the Hatzolah ambulance corps in New York City, and both worked almost 24/7 during the height of the COVID pandemic in the city.

“We saw a lot of scary things. We didn’t even have time to stop for a second and think about it,” says a somber Yoely in the video. Click here or on the image below to watch. 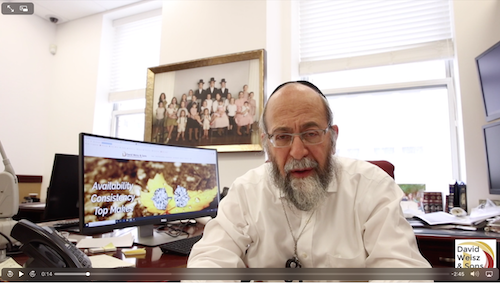 “For me, and my brother, it was the unknown,” Yoely told The Centurion. He has volunteered with the corps for 11 years. Zisha has been a volunteer for three years.

“It was constant, emergencies far, far beyond regular volume. A typical day from March 18 to April 15 involved me getting out of bed as early as 5 a.m., running from one patient to another. You take one to the hospital and there was always another.

Going into the hospital and seeing how it was lined up with patients was frightening, but he said the hardest part was watching families bid their loved ones goodbye. Hospital visits were not allowed, so when the patient left in the ambulance nobody knew if that was the last goodbye.

After about 10 days, the ambulance corps also began trying to set up home care whenever possible. “After then, we realized the hospital was not the place to be,” says Yoely. “We arranged with different organizations and companies and try to make a hospital in the patient’s house, bringing oxygen generators, medications, IV lines, anything they need so as not to have to go to the hospital and G-d forbid, die alone.” It was a wide-ranging effort with other organizations but done through Hatzolah. Part of their role as EMTs was also to go back to those houses once or twice a day to check up on the patients. 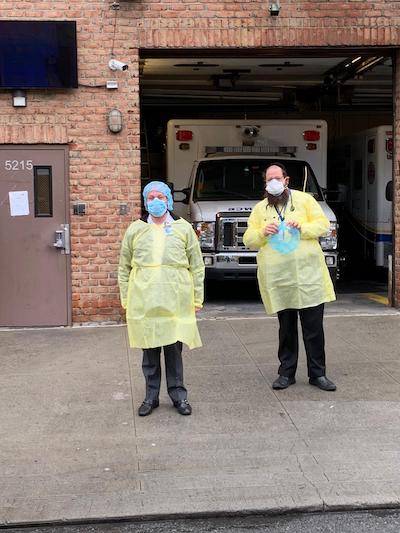 The Weisz brothers on duty as EMTs.

During all that, two of Yoely’s own uncles caught COVID. Thankfully both have survived.

“Every person that came home from hospital, it was like, ‘Thank G-d they’re home and doing better.’ I was brought up in a house where you do what you need to do and then focus on the future. We take all G-d has given us and we pray.”

Cases began dropping off after April 15, and now the Weisz family is again turning its attention to diamonds and the industry. That’s when they set up the SURVIVE! support program for all jewelry businesses struggling with the effects of the pandemic, whether customers of David Weisz or not.

“It goes to what our philosopy is,” says David. “We’re Americans. We owe everything to this country. It saved us, gave us an opportunity to grow. This is all connected. The jewelry business relates to where we come from. If you’re not out there for other people, you’re not going to survive. Be out there for your friends, for all Americans, and it will all come back to you and you will be better.

“And this is the way we will survive COVID. If we help customers and noncustomers alike, everyone comes out way ahead. If we just focus on ourselves, we won’t. If we help each other we can make it.”

Adds Yoely, “There is a lot we can do together with our partners in the industry to help us all come back stronger. The opportunities are there already and together everyone could come out of this a lot stronger.”