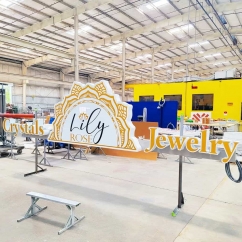 St. Petersburg, FL--The summer will bring new beginnings for a local family designing and hand-making crystal jewelry, as they will open their first store in downtown St. Petersburg.

According to a local news report, Lily Rose Jewelry Co has been working in their new retail space at 200 1st Street North. The new shop would sell crystals, and jewelry such as bracelets, necklaces, and bead-malas. The location is just a few blocks west of St. Pete Pier's entrance.

The owners, Sarah Simoncini and her husband, Joe Siminicini, said in the report that their goal was to create jewelry with the "highest quality all-natural crystals and metals" and sell it at an affordable price.

The new outlet in the 1,200-square-foot space replaces a juice bar and eatery, which was forced to vacate after a fire incident in 2019.

The report adds that the duo sources crystals friends in dozens of countries ‚ directly from the mines. And this is something which makes them stand out.

"Many of the crystal shops in Tampa Bay use a wholesaler or middleman to source their crystals," said Sarah, according to the report. "There's nothing wrong with that, but it means those shops all have similar crystals. With our connections to direct mines all over the world, we have very different offerings."

The move's quite a shift in plans for the couple, who'd initially thought to keep the brand only online. But then they decided to try selling at local markets in Tampa Bay. They received some good responses. But then COVID happened.

"We eventually had three market booths going at one time," said Sarah in the report. "Business was great, and we were even picked to be a vendor at the new St. Pete Pier marketplace. But then COVID-19 hit, and all the markets shut down."

The city's been their constant adviser. "[I] think people feel they can be themselves more in St. Pete—especially downtown," she says in the report. "It was only ever St. Pete for us."

Read more about their store opening and business journey in the entire report.