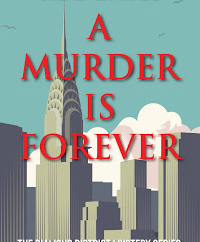 New York, NY—Rob Bates, a renowned journalist in the jewelry industry with almost 30 years’ experience covering the diamond sector, has penned a mystery novel that incorporates both diamonds and his own Jewish culture—also something central to the diamond industry.

The novel, A MURDER IS FOREVER: The Diamond District Mystery Series, focuses on Mimi, an out-of-work journalist who goes to work for her father’s gem company in New York City’s diamond district. Although she and her tradition-bound father Max often butt heads, he very wisely warns her that the industry is as much about sorting people as sorting stones—and that like diamonds, people can have some major flaws. After her diamond-dealing cousin is murdered, ostensibly for a pink diamond worth $4 million, Mimi learns her father was right about that, when she finds herself in the middle of a massive conspiracy and she doesn’t know who to trust or what to believe. She needs to find the truth about the diamond and her cousin before she ends up dead as well.

Bates, whose grandfather was a diamond dealer, started his career at Rapaport, then went to National Jeweler before joining JCK in 1998 where he's now the magazine’s news director. He says that unlike other sensationalized tales of the industry such as the movie Uncut Gems or even the long-ago Blood Diamond movie, he wanted his book to reflect the diamond district he knows so well: ordinary people doing ordinary things that just happen to involve very expensive merchandise, and reflect some of the industry’s unique quirks. Father and daughter characters Max and Mimi are named for Bates’ grandfather, Max Grajower, and his late mother Mimi, although he says it’s to honor them, not be a reflection of either’s personality.

The book, the first in a series (the second one is almost finished and a third one is in the offing) has been released in paperback and e-book formats and is available for sale on Amazon, Barnes & Noble, Kobo, Walmart, Target, BookDepository.com, and other major bookselling sites.

The multitalented Bates also is a stand-up comedian of some renown. He’s performed for various industry events and at comedy clubs in New York City.

Next article:
Exclusive! Kim Pelletier, CEO of Get-Diamonds, Talks About The Platform Created By The Industry For The Industry