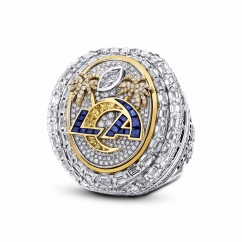 Los Angeles, CA--The Los Angeles Rams unveiled their Super Bowl LVI ring at a special ceremony in Los Angeles with players, coaches and staff. The ring signifies the Rams historic 23-20 win over the Cincinnati Bengals at SoFi Stadium, to culminate the first season fans were able to watch the team at the Rams House.

"To be able to not only win the Super Bowl, but also to do it in the house Mr. Kroenke built, is really a dream come true," said Los Angeles Rams Vice President of Football & Business Affairs Tony Pastoors, in a press release. "We are grateful to Jason and his team for their creativity and passion to deliver a championship ring that reflects our team and their historic season, the one-of-a-kind stadium where it happened, and the city that inspired all of it."

Given the significance of SoFi Stadium to the Rams and the story of the entire 2021 NFL season, the shape of the Super Bowl LVI ring mimics architectural and design elements of the stadium. Between the top and body of the ring sit columns that mirror the columns that hold up SoFi Stadium's iconic canopy roof. This unique design allows a sight line to the stadium bowl hidden inside the ring. The .23 carats of diamonds on the columns represent the 23 points scored in the Super Bowl.

Twisting the Jason of Beverly Hills signature removable top opens to reveal SoFi Stadium's bowl, complete with the Infinity Screen. The underside of the removable top features a view of SoFi Stadium's translucent ETFE roof surrounded by a piece of a Super Bowl LVI game ball. The field in the stadium is made up of a trademark green material that consists of remnants of the actual turf that the 2020 and 2021 seasons, including Super Bowl LVI, were played on.

Much like SoFi Stadium, the Super Bowl LVI ring is unprecedented, boasting the most diamond carat weight in Championship ring history. Overall, the ring has approximately 20 carats of white diamonds set on white and yellow gold. The 20 carats celebrate the official opening of SoFi Stadium in 2020. The ring has 1.12 carats of round diamonds to represent January 12, honoring three key dates in Rams history: on January 12, 2016, the Rams were approved to move back to Los Angeles; on January 12, 2017, the Rams hired Head Coach Sean McVay; and on January 12, 2019, the Rams beat the Dallas Cowboys 30-22 for their first playoff victory after returning to LA.

On the face of the ring is the Vince Lombardi Trophy, comprised of one marquise stone and a trophy base of .12 carats of round diamonds to represent the 12 regular season wins. The palm trees on either side of the Trophy celebrate Los Angeles and consist of .26 carats of diamonds representing the franchise's 26 total postseason wins. The center Rams LA logo features special cut blue and yellow sapphires.

More details on the ring are in this press release.