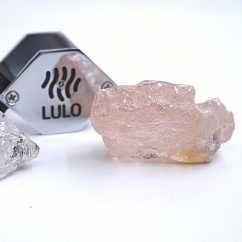 Johannesburg, South Africa--Many large diamonds have chronicled timelines, some still preserved, others lost to tales and myths. Found in Angola's Lulo alluvial diamond mine owned by Lucapa Diamond Company, the "Lulo Rose" pink diamond could be another addition to that list.

“Only one in 10,000 diamonds is colored pink. So you’re certainly looking at a very rare article when you find a very large pink diamond,” Lucapa CEO Stephen Wetherall told Associated Press.

The report adds that the rate pink gemstone could fetch a high price at the auction. The mine, which employees about 400 staff, has already produced two largest diamonds ever found in Angola, including a clear 404-carat diamond. Workers at the mine have also found at least 27 diamonds of 100 carats or more.

For the Central African country, such achievement is an opportunity with "potential and rewards."

As per the report, Diamantino Azevedo, Angola’s Minister of Mineral Resources, Petroleum and Gas said, said, “This record and spectacular pink diamond recovered from Lulo continues to showcase Angola as an important player on the world stage for diamond mining and demonstrates the potential and rewards for commitment and investment in our growing diamond mining industry."