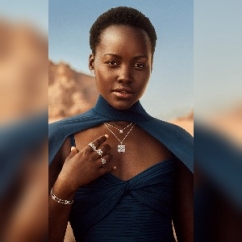 London, United Kingdom--De Beers announced in a news release that it had chosen Lupita Nyong’o as its first Global Ambassador. The Academy Award-winning actor stars in the new brand campaign, De Beers: Where It Begins, which tells the story of the only global luxury brand that starts at the source.

As a core element of the partnership, Nyong’o will support De Beers’ Building Forever commitment, which aims to advance women and girls where its diamonds are discovered.

De Beers will work with Nyong’o in pursuit of the brand’s public goals to engage 10,000 girls in STEM, support 10,000 women entrepreneurs, and invest at least $10 million across southern Africa to achieve these goals by 2030.

“This campaign brings to life the transformative power that I feel when I wear De Beers’ diamond creations, and the pride in knowing where they come from and the good they do," Lupita Nyong’o said in the news release. "My partnership with De Beers allows me to extend my advocacy for women and girls around the world."

The De Beers Where It Begins campaign launches globally with integrated media activations across multiple touchpoints on November 3.

Learn more in the entire release.