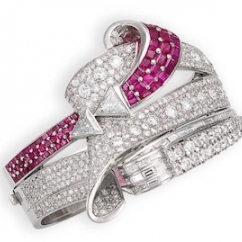 London, UK—High-end jewelry is looking very appealing to wealthy investors as a place to store assets. The Knight Frank Luxury Investment Index (KFLII), which tracks the value growth of 10 tangible-asset investment sectors (i.e. wine, art, jewelry, antiques, etc.) says jewelry grew 4% year-on-year in the second quarter of 2017, overtaking the performance of classic cars, which historically has been a leader in the category but last year rose in value only 2%. At left, a circa-1950 ruby and diamond bangle valued between $15,000 and $20,000 is slated to go on the block at  Bonhams' Jadeite and Fine Jewelry auction this week.

The KFLII overall rose 5% in value year-on-year to the end of Q2 2017, surpassing other safe-haven asset classes such as gold (-8.3% year-on-year for the same period). But the accompanying report especially narrowed in on the sudden increase in desire for investment in fine jewelry. At press time, gold had recovered slightly; it was up to $1,312, about 1% higher than its closing at the end of June 2017.

As an investment, the jewelry category over five years has surpassed the overall KFLII (49% vs. 42% growth, respectively) and over 10 years has risen in value by 142%, only slightly trailing the overall KFLII’s 145%. While record-setting auctions garnered top prices for both colored gems (such as the 18.04-ct., $5.5 million Rockefeller emerald) and diamonds (like the 59.6-ct., $71.2 million Pink Star), over the course of a decade the top value growth has been in pearl jewelry, which appreciated 282% over the past 10 years. But now pieces from the Belle Epoque and Art Deco eras, as well as highly sought after modern designers are gaining fans, and have appreciated 93% in value over 10 years. And the Pink Star notwithstanding, the Fancy Color Research Foundation still ranks blue diamonds as the fastest-growth value, with a 5.5% gain year-on-year in June. 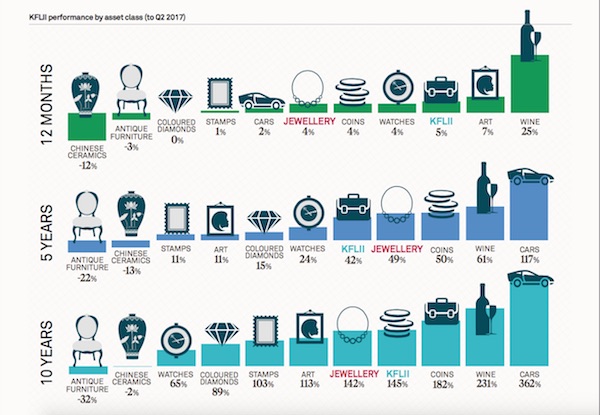 Jean Ghika, head of the jewelry department at London-based Bonhams auction house, said there is a current trend for jewels from the post-[WWII] era, where the emphasis is on design, quality and workmanship. These pieces, often unique or in limited supply, are easy to wear, distinctive, and increasingly sought after by discerning collectors, she explained in the report. In particular, certain jewelry artists are in higher demand than some established jewelry brands. Those artists include Suzanne Belperron, Coco Chanel, Andrew Grima, Hemmerle, Georges Braque, and Peter Chang, a contemporary English designer whose jewelry is known for the use of recycled plastics. 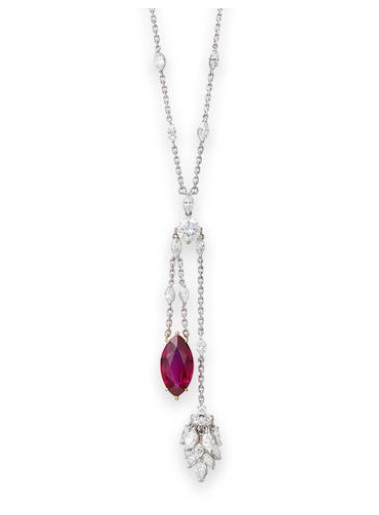 High jewelry doesn't have to be super-formal or super-expensive: this very wearable ruby and diamond necklace is valued between $5,400 and $6,400. It is part of Bonhams' Jadeite and Fine Jewelry auction this week.

Nor is the portability of jewelry lost on its owners. While Americans haven’t suffered major war at home since the Civil War, nor had to worry about instability of currency, that is not the case for most of the rest of the world and jewelry as a highly mobile store of wealth is ingrained in people’s psyches. Experts have often cited this as a fundamental reason why Europeans and Asians have a higher affinity for jewelry ownership than Americans.

In the report, author Andrew Shirley interviewed two well-known jewelry collectors, author Barbara Taylor Bradford and jewelry auction expert Susan Abeles, head of Bonhams’ U.S. jewelry department. Key advice to new collectors from both: educate yourself, buy what you love and are passionate about and will wear, buy fewer but better pieces, and always keep the original boxes they come in, as that will increase value if you go to sell them later.

Previous article:
What Price is your Inventory Really Costing You?