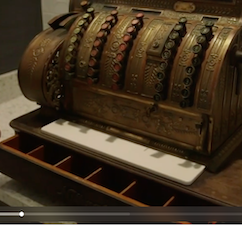 Chicago, IL—When Chicago antique collector Bruce Bradley died earlier this year, it fell to his daughters to sort through his beloved collection of antique cash registers. The women, Pam Spain and Christy Kessler, remember having cash registers all over the house, and playing with them as children, finding play money, coins, and trinkets in the drawers. Image: The old Bern Jewelers cash register. Credit: ABC7-Chicago

As an adult, Spain, who is mechanically inclined, helped her father restore some of the cash registers he would buy. In the process of cleaning one, a 1913 model, she found the original proof of purchase to Ellis Bern of Chicago, IL, one of the brothers who owned Bern Jewelers, founded in the early 1900s as a watch and clock shop.

According to the store’s history, Charles H. and Ellis Bern were descendants of Isidor Bern, a clockmaker in Sweden. The brothers, who apprenticed to their father, emigrated to America and opened a watch and clock shop in Chicago.

Ellis Bern later left and opened his own watch repair business, but his son, Jerry E. Bern, went to work for his uncle after returning from WWII. He stayed there for about 20 years, until 1967 when he purchased Marshall Pierce & Co., a well-established Chicago jeweler founded by its namesake in 1928.

Jerry Bern actively expanded and upgraded the store’s merchandise and services, setting it on the course to become the luxury jeweler it is today. Two of Jerry’s three sons—Jerry Jr. and James—joined their father in the business and, in time, took over ownership. Between them and the next generation—Evan Bern, Jerry Jr.’s son—the store became one of Chicago’s premiere upscale jewelers, relocating to tony Michigan Avenue and offering brands such as Cartier, Jaeger-LeCoultre, Oscar Heyman, JB Star, Tacori, A. Link, Baume et Mercier, and more. 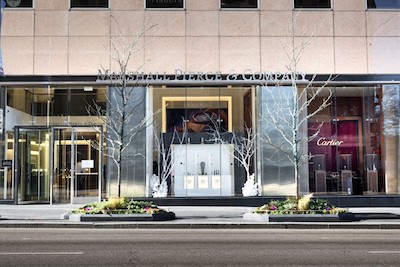 And that’s how Pam Spain reconnected the cash register with its original family. Chicago’s ABC7-TV reports that Spain reached out via email to Evan Bern, Jerry Jr.’s son, saying she had the cash register and believed it was the from the family’s store. (The report did not say how she knew Marshall Pierce was owned by the Bern family.) But the cash register was plainly visible in photos of the old Bern Jewelers, and Evan Bern made plans to get it from Spain and give it to his father for Christmas. It was so heavy they had to wheel it into the living room in a cart, he told ABC7. 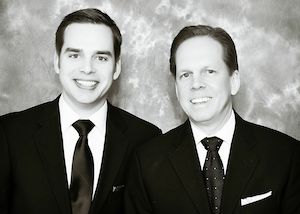 Jerry Jr. immediately recognized it as the one from his grandfather’s store. “You could have knocked me over with a feather,” he said to ABC7. 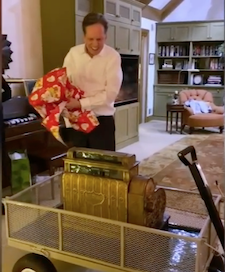 Jerry Bern Jr. unwrapping the cash register on Christmas. It was so heavy it had to be wheeled in. Image: Bern family video via ABC-7 Chicago.

Kessler said her father, Bradley, was very sentimental. "I'm sure he's smiling down from heaven knowing that this treasure that he had for years and that we played with as children went back to the original family," she told the station.

"There's been a lot of highs and lows this year and it's just really nice to end 2020 on a positive note," Evan Bern said.