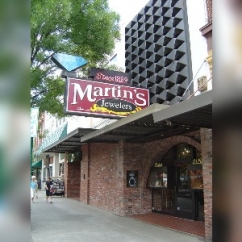 Walla Walla, WA--Martin's Jewelers announced that it is closing after 133 years in business.

The store's owner, Erin Mason — a fourth-generation jeweler — announced the closing earlier in November. Per a report, the store announced that prices would be reduced to mark the closing and "liquidate everything."

The report noted that the store would stay open until its inventory was gone and could remain open until January.

"Even if we have five things in the store, I would stay open until Christmas," Mason said in the report. "It will give people visiting and families a chance for one last walk-through. Our connection with customers is the best part of the business."

The response so far has been overwhelming. "People come in daily and say, 'I bought this from your great-grandfather,' or 'My ears were pierced here in the 1940s.' It's our history, our town's history. It's so ingrained," she noted in the report.

Learn more about the store's operation and its history in this report.

Next article:
Le Vian Partners with GODIVA With Its Chocolate Diamonds