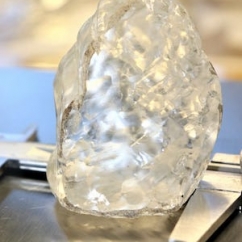 Gaborone, Botswana—A massive rough diamond weighing almost 1100 carats—1,098 to be exact—was unearthed earlier this month by Debswana Diamond Co., the company formed by a partnership between De Beers and the Government of Botswana. Image: Debswana

Reuters reports the stone (pictured) is believed to be the third-largest diamond in the world, with only the Cullinan and Lesedi la Rona ahead of it.

The 3,106-carat Cullinan, parts of which are in the British Crown Jewels, was discovered in South Africa in 1905. The 1,105-carat Lesedi la Rona, meanwhile, was a more recent find, unearthed by Lucara Diamonds in Botswana in 2015.

Debswana Diamond Company's acting managing director Lynette Armstrong told Reuters the as-yet-unnamed stone is the largest diamond to be recovered by Debswana in its 50+-year history.

"From our preliminary analysis it could be the world's third largest gem quality stone. We are yet to make a decision on whether to sell it through the De Beers channel or through the state-owned Okavango Diamond Company," she said.

The Natural Diamond Council says valuation on the diamond will be done in the next few weeks. The stone is 73mm long, 52mm wide, and 27mm thick, roughly between the size of a lemon and a peach.

The country of Botswana itself will benefit from the diamond’s discovery, says NDC. 80% of the revenue from Debswana goes to Botswana state coffers through dividends, royalties, and taxes. Rachel Mothibatsela, a spokeswoman for Debswana, says they “will work with the government of the Republic of Botswana and De Beers to value and sell the diamond to ensure it returns maximum benefit for the people of Botswana.”