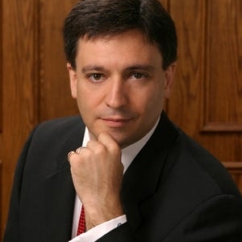 Birmingham, MI—Joseph DuMouchelle, owner of DuMouchelle Fine & Estate Jewelers, has pled guilty to orchestrating a $12 million fraud involving a 77-carat diamond ring called the Yellow Rose. (Image: The Detroit News) The ring features an emerald-cut center with more than five carats of yellow and white baguettes, set in platinum. It was owned by a Texas couple.

Deadline Detroit says DuMuchelle admitted tricking a North Dakota-based investor into putting up $12 million to purchase the jewel. The two were supposed share in the purchase and, later, profits from selling it for $16 million. But DuMouchelle pocketed the money and never bought the piece. Thomas Ritter, the investor, is believed to be only one of 26 victims DuMuchelle has defrauded, to the tune of more than $25 million.

DuMouchelle became known for a roster of celebrity clients and twice auctioning off the engagement ring that Donald Trump gave to his second wife, Marla Maples. Maples herself had DuMouchelle auction the ring when she divorced from Trump, netting $110,000, says the Detroit News. The couple that bought it gave it back to him to sell in 2016, when it sold for $300,000.

The Detroit News reported Monday that DuMouchelle faces up to 12-1/2 years in federal prison.