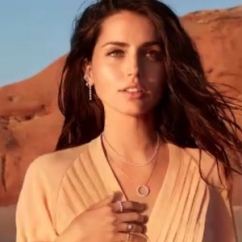 Antwerp, Belgium—The Natural Diamond Council on Tuesday unveiled its first major diamond category consumer advertising campaign. The campaign, which goes live around the world on Wednesday, September 16, was unveiled by NDC CEO David Kellie at the close of the virtual World Diamond Congress.

Although the Diamond Producers Association, the predecessor to the NDC, undertook the task of relaunching generic advertising a decade after De Beers abandoned it, this is the first such campaign produced under the auspices of the rebranded Natural Diamond Council. The new campaign represents a series of other firsts as well: it is the first generic diamond category campaign to feature a celebrity ambassador, and the first that is not focused on either a hero product or a specific diamond-gifting occasion. Although DPA had gotten away from the heavy hero or occasion push that marked De Beers’ predominant strategy, this campaign moves even farther into versatility, promoting diamond jewelry of all kinds, for all relationships, and for all moments.

Moments are the focus of the campaign. Its tagline is, “For Moments Like No Other.” Kellie says consumer research was done on the topic and the concept came out in the top 10% of luxury advertising in terms of purchase intent.

“Ultimately it’s about purchase intent. Does the consumer love jewelry and love the occasion and want to buy jewelry?” he said.

The campaign features Cuban-American actress Ana de Armas (top image) as NDC’s new celebrity brand ambassador. The rising actress—nominated for a Golden Globe Award for her leading role as Nurse Marta in Knives Out—is widely predicted to be the “next big thing” on the scale of an actress like Sophia Loren, according to Vanity Fair magazine. She will be playing the part of CIA agent Paloma in the next James Bond movie, No Time To Die, slated for release this fall.

“She’s a wonderful ambassador for us,” says Kellie. “She spent a lot of time with us and partners of ours to really understand the industry. She has huge integrity, and only joined when she really understood what we stand for and the value to industry.”

Indeed, the NDC video in many ways informed de Armas’s portrayal of Paloma, the “Bond Girl” in the upcoming movie. In an interview in Vogue, she shares how her strong belief in sustainability, equality, and human rights was central to her decision to become the NDC ambassador. From her Vogue interview:

“It makes you feel good when you buy a diamond, because you're not only celebrating a special moment, but you know that that diamond was obtained in a way that respected the workers’ lives and working conditions,” she says. “It felt right to be working with a company whose values I respect and believe in.”

“I think the values and priorities and beliefs of my generations have shifted in a way,” she says. “I don’t think I’m unique in believing strongly in sustainability and human rights and equality and giving back to communities, and making sure people are not being exploited by multinational companies and all of that.”

The campaign was shot in July, under very difficult circumstances. It was one of the few being shot on this scale, Kellie says. It was shot under famed director Manu Cossu, also known for shooting the Miss Dior campaign with Natalie Portman. “He’s very selective in his campaigns. He very much believes in our story, and his translation is something we’re very proud of,” says Kellie.

The musical track for the campaign is Surf Mesa’s ily (i love you baby), which is essentially a remake of the chorus from Frankie Valli’s 1967 hit “Can’t Take My Eyes Off You.” The song, a top upload on TikTok, speaks to multiple generations, says Kellie.

As mentioned, the story focuses around our moments, both ones we have experienced, and ones yet to create. A variety of relationships are shown, including romantic, mother-daughter, friendship, and just a woman enjoying her own diamond jewelry. The campaign features almost 50 total diamond looks. “We very much want to feature innovative product, accessible product,” says Kellie. 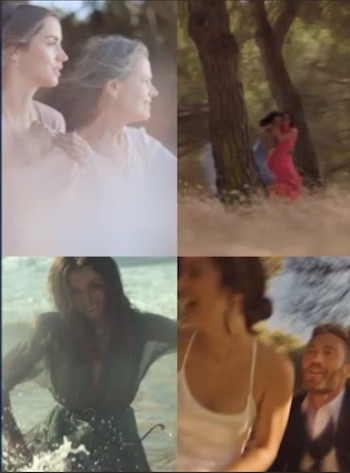 The different elements of the NDC campaign video can be broken out into smaller segments for different occasions, such as a mother-daughter relationship for Mother's Day (top left), two friends or a same-sex couple (top right), traditional romance for Valentine's Day or holiday engagement (bottom right), or self-purchase (bottom left).

“All the research shows the difference between diamond jewelry and other luxury goods is that diamonds stand for something above the physical meaning of the product,” says Kellie. In other words, it’s about moments.

The video has multiple versions: a :30 second, :15 second for different holiday focuses, and a snipped :06 second for social media. It will break during the Emmys, which is the first major red-carpet event of the 2020-2021 awards season, albeit a virtual one this year.

“We expect very high ratings to see how a virtual red-carpet event works. It’s very important to have a tent-pole moment when we launch,” says Kellie.

The campaign also has microsite within the Natural Diamond Council’s main website. Its address will be moments.naturaldiamonds.com.