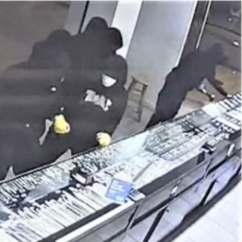 Concord, CA--At 7:00 p.m. nine masked suspects entered a mall retail jewelry store armed with hammers and began smashing showcases. When employees tried to intervene, they were kept back by the hammer wielding robbers. Shoppers in the mall mistook the sound of smashing glass to be gunshots, although no shots were fired.

RECOMMENDATIONS REGARDING SMASH AND GRAB ROBBERIES: