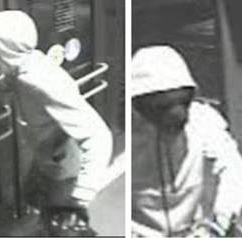 On December 1, as employees of a jewelry store in Phoenix were locking up for the evening at 8:10 p.m., they were approached by a suspect who had a weapon and ordered them back into the store. He demanded high end watches, expensive stuff, gold items, and demanded the employees open the vault. The suspect had the employees put merchandise into a bag and he fled.

The suspect, a black male described to be in his 20s, is the same one who conducted a gunpoint robbery two months earlier in Chandler, AZ, a suburb of Phoenix about 22 miles away. At that time, the suspect entered a jewelry store at 6:45 p.m. on October 3 and displayed a weapon. He ordered everyone to the ground and demanded high-end watches, and after that, gold chains. In that incident, the suspect appeared to drive himself away in a black or dark colored BMW (below).

If you have information, contact Jewelers' Security Alliance, (212) 687-0328 or jsa2@jewelerssecurity.org.

Next article:
Strength And Hopefulness Behind Pantone 2021 Colors Of The Year