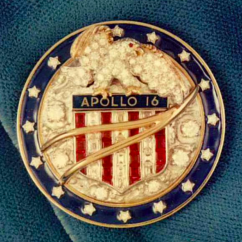 Astronauts Charles Duke Jr, Thomas Mattingly II & John Young were gifted and traveled with these gemstone encrusted medallions by the owner of North American Rockwell, the command module’s manufacturer. Fifty years later, this moment in history is being noted by the luxury jeweler.

Around the time of this event, Oscar Heyman produced a similar version of the medallion using primarily enamel instead of gemstones. The luxury jeweler asks the members of the public to let them know if anyone comes across one of these medallions.

“We continue to 'reach for the moon' in terms of our designs, gemstone quality, manufacturing and customer service,” the company said.

Next article:
120+ Centurion 2022 Attendees, Exhibitors Share Their Opinions on the Recent Show