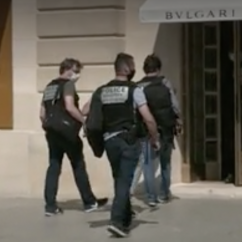 Paris, France--A heist at jeweler Bulgari in Paris, France ended in an arrest of two of three suspects.

A heist at a luxury jewelry store in Paris ended with a car chase, a suspect shot in the leg and two arrests, police in the French capital said Wednesday.

Officers chased a car containing three suspects after they were alerted to an armed robbery at the Bulgari store in Paris' Place Vendome around noon local time (6 a.m. ET) Tuesday, police told The Associated Press.

The car was later found abandoned, but police told the AP that two people were arrested in connection with the robbery and one suspect was shot in the leg by an officer before they were detained.

Police added that two scooters believed to have been used in the crime were also seized near the store, which is situated in one of the French capital's most expensive and luxurious shopping areas, where many prestigious labels — including Cartier, Rolex and Chanel — base their flagship stores.

Up to $12 million worth of jewels were taken, Reuters reported. Police would not confirm this. The stolen items had not been recovered, a spokesperson for the Paris Prosecutor's Office told NBC News.

Click here for the full story or on the link below. A video link is located below.
https://www.nbcnews.com/news/world/suspects-arrested-after-heist-bulgari-jewelry-store-paris-n1278667