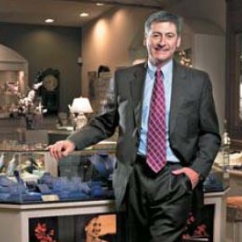 We purchased a Smart Car three years ago. Today there are more Smart Cars on the road, but people still point and look. It has become a strong branding component—people associate the blue Smart Car and the MURPHS vanity plates with our store.

We have our new logo on the car, as well as logos from three strategic brand partners: TAG Heuer, Tacori, and Hearts On Fire. It’s essentially a moving billboard, which saves us marketing dollars. We’re saving a lot of gas, and customers love it.

Which of your advertisements has elicited the most response?

When we opened our Hamburg store, it was directly across the street from the future site of one of the nation’s largest Cabela’s. This mega sporting goods store is one of Pennsylvania’s biggest tourist attractions, with 6 million to 7 million visitors a year. To attract some of their customers, we put up a billboard near the store that read A Hunting Store for Women. Since 2005, we’ve kept the message the same, but changed the backgrounds. People still make comments and take pictures of it.

What’s your most memorable sale?

After a long day at the Vegas show in 2003, I was having a drink with a friend when two women commented on the Rolex watches we were wearing. I told them we were retail jewelers and that I was based in Pottsville. One woman, from nearby York, mentioned that her boyfriend should contact me for some jewelry and asked for a business card. The boyfriend called two weeks later and purchased a Hearts On Fire engagement ring. Since then, they’ve purchased many diamond jewelry pieces.

What advice have you received from a fellow retail jeweler that changed the way you run your store?

Years ago, a jeweler friend advised me to buy diamonds direct from dealers in Belgium. Since then, I’ve been making two trips a year for 10 years to buy diamonds. The radio station I advertise with has partnered with me to do live call-ins from Belgium. The radio personalities call me “The Diamond Guy,” and the name has stuck. We do a lot of preselling, and I give customers progress reports on their diamond purchases. An engagement customer wants me to document the purchase of his diamond during my next trip as part of the couple’s engagement and wedding story.

What’s the best idea you’ve come up with for your store?

For years I’ve been doing the Ugly Tie Father’s Day event, charging people a dollar to vote. To take the contest to another level, I sent letters to many celebrities and sports figures. I’ve received ugly ties from Bob Hope, Henry Winkler, Jay Leno, Bob Barker, Larry King, and football coaching legend Lou Holtz. The annual event is well-received, it’s raised a lot of money for charities, and we have a great display of ugly celebrity ties that customers enjoy.

Next article:
Michael Beaudry, Inc. About to Emerge from Reorganization