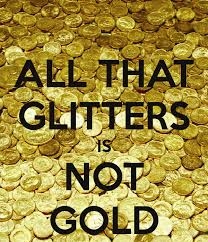 New York, NY—“New” is the most compelling word in marketing (followed, perhaps, by “free.”) The entire industry of marketing and advertising was built around chasing what’s new. It’s not just new products, either: it’s also new strategies, new media, and new consumers.

In a special gold market seminar sponsored by Initiatives in Art and Culture earlier this year, advertising executive and consultant Peter Hubbell of BoomAgers addressed the difference between chasing the glitter vs. winning the gold (pun intended). The more jewelry you sell, the more it pays for more marketing, and creates a virtuous cycle, Hubbard said--but "for all that to work, you’ve got to be focused on substance, and you can’t confuse substance with style,” he warned.

The first critical element to successful marketing is learning to ask the right questions. The Big Question, of course, is “what’s next?” Even with many people in the business of trend prognostication and crystal balls, it’s still hard to know what’s next. Furthermore, said Hubbell, it's essential to recognize when what’s next is not the best next for you. He recalled a conversation with Mark Hanna, CMO of Richline Brands, about the Alex & Ani jewelry phenomenon. Tremendously popular, many jewelry industry people point to the brand as an example of what’s next and struggle to do their own version of an Alex & Ani type product.

Hubbell took a dive into the brand. “I had to keep scrolling till I got out of the $28 zone and the farthest north I got was $78. We’re trying to sell more gold and a lot of people are putting a lot of time, effort and investment toward something that’s $28. Alex & Ani is a great little business opportunity. But is it great for you?”

"While 'who' isn’t as exciting as 'new,' you can make and market a lot of stuff but it doesn’t matter if there’s nobody to buy it. The smartest marketers in the world aren’t saying ‘what categories do we need to be in that we’re not in today?’  They’re saying ‘who are the consumers that are going to matter most in my business for the next five, 10, 15, 20 years?’” 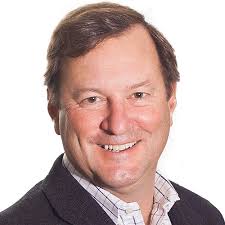 One of the first things marketers need to do is pick up their heads from their screens, says Hubbell. Using a Boomer-appropriate musical analogy of Meat Loaf’s “Paradise By The Dashboard Lights,” he says too many businesspeople spend too much time looking at their own dashboard lights—i.e., metrics.

“We’re going to look way down the road towards a better destination than the one a lot of us are experiencing right now. Look beyond those dashboard lights on the road to growth. It’s a journey. But if you’re letting the GPS tell you where to go, you probably don’t have a vision or big picture. You need a North Star, a bright shiny object vision of where you are going.” (Read Hubbell’s Huffington Post blog on the topic here.)

Every decision and action you make in business must filter through the lens of that north star: is it going to build the brand as well as the business? As an example, he pointed to Kitchen Aid when the brand started expanding its classic heavy white mixer into a line of colorful appliances that were as much about home décor as cooking tools. But when company executives wanted to use plastic in the mixers to bring down production costs, the short-term improvement on the balance sheet would have harmed the long-term vision of the brand’s north star.

It’s a tough balance, acknowledges Hubbell. “We love the new, but we also live in the now.  Expectations have changed and success is measured in weeks. Wall Street used to reward companies for sustained growth. That reward structure went out the window a few years ago; now they just want fast growth. In a world where the bar gets raised higher every day, you’re going to make the short-term decision because that’s going to build the business and get you by. Your horizon point has been shortened. It’s the dashboard, not the destination or the north star. And by the time the ramifications of a crappy decision are felt, you’ll likely have moved on and it will be someone else’s problem.”

Hubbell says right now fast growth is still focused on where, not who, though he says another full seminar could be devoted to the next emerging market on the map, which is a demographic—global aging—not a geographic.

“Business was simple when media was simple. You had to focus on salesmanship when all you had was television, print, and radio. Now it’s complex, but instead of trying to make the complex simple, we’re jumping right in and letting the complexity make the decisions for us.

He related this conversation that happened multiple times with clients:

Hubbell: “Have you thought about why you think you can generate sales through that particular social media?”

Client: “No. The board was saying we should be on some of this modern media, so can you help us do that?”

Hubbell says, “We’re chasing likes, views, shares, audience, links. It’s all part of chasing the latest new thing.” But ultimately, it’s about how you are going to sell more jewelry. “When and where is my customer (who) going to be most receptive? And what media will help me reach her when she’s most receptive?”

Lastly, the biggest confusion of gold vs. marketing glitter is the Millennials—that huge cohort that is almost every marketer’s holy grail. “Everybody wants to talk about aging, but what they really want to talk about is Millennials,” says Hubbell. There are 81 million Millennials in the United States—now outnumbering Boomers—and two billion worldwide.

“There’s very good reason to be excited about them. They’re large, they’re new, they’re digitally native, they’re social and connected and they represent the future of consumption and they’re going to age right into the sweet spot of consumption and everything’s going to be beautiful so let’s get at it!”

Not so fast, says Hubbell. That’s the glitter, not the gold; the style, not the substance. The real substance—and gold, if you will—is that Millennials are still a work in progress and not going to enter their peak earning and spending years till 2020 at the earliest. Indeed, most won’t until 2030.

What are you going to do for the next 14 years?

Here are some more sobering numbers (some from Goldman Sachs and some from the Natural Marketing Institute):

Here’s where it gets really scary, says Hubbell. “The generational must-haves for my [Boomer] generation are no longer important. The percentage of Millennials who say they are indifferent to owning one of these items or it’s not a priority is staggering:

The paradigm has shifted from ownership to access, says Hubbell. Boomers strove to own nice things but for Millennials, access is good enough.

“I don’t need to buy a car. I have access to a ZipCar or Uber. There’s Rent the Runway and you can change your closet forever just by renting the stuff. There’s HauteVault—if it ticks, sparkles, or shines, just rent it. There’s AirBnB for vacation, and now you can even couch surf and move in with people to really experience local flavor! (Neiman Marcus is already looking ahead and teaming up with Rent The Runway; read more about that here).

“For the sustainability people, this is good. You don’t need to pull more gold out of the ground, we can share what’s already there,” Hubbell added.

But how good is that for jewelers? Hubbell suggests starting to carve out a role in the sharing economy now, while not counting Boomers out yet. Most high-end luxury jewelers already know Boomers are not washed up and waiting to die, nor are they all living on a fixed income waiting to spend all their disposable cash on a hip replacement.

Kyna Steinfurth, media director of Fruchtman Marketing, says exactly the same thing. Although the demographic age boxes that come with almost all product registration cards and marketing surveys lump “55+” together as a category that may as well be called “irrelevant,” it’s doing a disservice to those customers who are probably your best and most affluent targets. How many consumers do you know between 55 and 65 are sitting on the couch watching TV all day?

If all those Millennials are not hitting their prime for more than a decade, finding new Boomer, (and Gen-X and even leading-edge Millennials 35+) customers while looking to the sharing economy as a good bridging strategy.

“The bridging strategy acknowledges we live in the age of aging. There is no other force that will shape the future of national, economic, health, and policies on public health and finance the way aging will,” says Hubbell. “It’s an unprecedented and massive force that most people don’t embrace or recognize because we have disdain for getting old.” But the number of people age 65 and older will more than double worldwide (to 1.5 billion by 2050.)

“There’s a thing called the longevity economy. It’s the economic value of all output associated with servicing 50+ consumers. The U.S. longevity economy is $7.1 trillion in economic value simply associated with people age 50+.  That is larger than the total economy of any other country in the world except China. Our longevity economy alone is larger than Russia, Brazil, and India’s economies combined.” Women’s Wear Daily put the fashion industry as a subset of Boomers, and came up with $21 billion in buying power. Those are big numbers, says Hubbell.

But we’re not interested in that economy. We’d rather go after Millennials because they’re the new new thing. “I’m not disagreeing, I’m just saying the future simply isn’t here yet. Choosing the generation that is going to represent your future is important but the beauty of modern media is that you can target a discrete audience with specific tactics. That means you can find the cohort of leading-edge Millennials already on their way to affluence, and also tap the trailing edge boomers still in their 50s and working—and cover all of Gen-X in between.

“Just look up from the ‘here and now’ glare of the dashboard lights and find your north star. At Leo Burnett (advertising agency) we used to say “reach for the moon, and if you miss you’ll still get a handful of stars.” 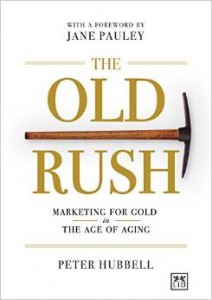 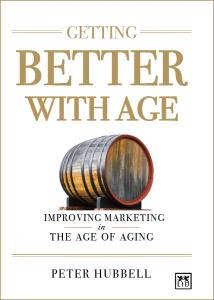 Peter Hubbell has authored two books about marketing to the demographic that has the money to spend. His books are available on Amazon.com.