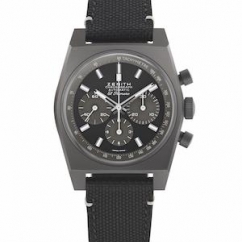 As the legend goes, in 1970 the company produced a prototype of a manual-winding chronograph housed in a blackened steel case. Only a handful were made and the model was never officially put into production. Even the records of those watches are extremely scarce, but longtime employees of Zenith remember them.

In 2019, Zenith was gearing up to celebrate the 50th anniversary of its seminal El Primero chronograph. Employees began searching the secret walled-off attic where Charles Vermot had once hidden all the plans and parts necessary to produce the El Primero movement, and there among the artifacts was a box with the original prototype of the mysterious black chronograph. The team enthusiastically agreed to complete the black chronograph project begun almost 50 years ago.

The Chronomaster Revival “Shadow” reimagines the prototype rather than reproduces it. Instead of blackened stainless steel, the new Shadow is housed in a 37mm micro-blasted titanium case and, unlike the manual winding prototype from 1970, the revival features the El Primero automatic chronograph movement.

The Shadow has grey counters and tachymeter scale subtly contrasting against a deep matte black dial. The hands and applied markers glow in the dark. The black rubber strap features a touch of white stitching, fixed to a titanium pin buckle that matches the finish of the case.