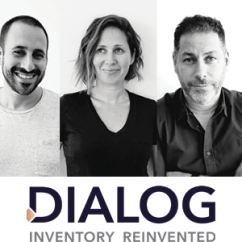 Below is the text of the article by Soltani:

Don’t call Dialog a memo service. It’s “the Netflix of the diamond industry,” says cofounder Itay Ariel. The innovative option from HRA, Canada’s leading manufacturer and distributor of loose diamonds and diamond jewelry, is “the world’s first subscription service for diamonds,” he declares.

For a monthly fee — 1% of the total stock’s value, or less after various incentives and rebates — Dialog gives retailers access to the most relevant assortment of diamonds for their customers. Unlike with traditional “call stones,” retailers get to hold all the diamonds physically in the store, saving them the trouble of ordering a specific stone from a vendor, waiting for it to arrive, and taking the risk of losing a client in the process. As soon as a gem sells, a replacement is automatically ordered; for US retailers, an identical diamond will be back in the store within 24 hours.

In addition to improving the variety of diamonds on the display shelves, Dialog aims to make unmoving inventory a thing of the past. By continually monitoring and analyzing what sells and what doesn’t, says cofounder Aaron Ariel, the service “maximizes inventory and maximizes the return on invested capital.”

Launched in November 2020, the subscription service includes diamonds with Gemological Institute of America (GIA), American Gem Society (AGS) and De Beers Forevermark certificates. It has established a strong presence in North America, Australia and the UK, with word-of-mouth feedback attracting a growing waiting list of jewelers who want to sign up. Dialog owns all of the diamonds it places in retailers’ showcases.

The value of the goods Dialog deploys ranges from about $50,000 for a small independent to $4 million for a chain store, on average. The David-and-Goliath situation many independents face when competing with larger retailers — which became more acute during Covid-19, since a quick response and adaptability were key to survival — can be rectified through this tailored inventory management system, cofounder Reut Rothstein points out. Quality- and scale-wise, “Dialog gives those small and medium businesses just as much inventory and merchandise as their neighborhood’s big chain store,” she says.

Having the diamonds on hand can also bolster the connection that consumers crave with their jeweler. “A lot of the technological advancements that have occurred in our industry have allowed manufacturers to almost sell direct,” Itay Ariel points out. “But what we’ve seen is that relationships are important, and consumers are walking into stores because they want that engagement. They want that relationship.”

The inventory fine-tuning that Dialog allows gives retailers a chance to rethink their use of resources. For instance, says Rothstein, it makes diamond-buying trips irrelevant. “It’s this enormous drain of time, money and energy that retailers can then use; [they can] take that capital, unlock it and put it into higher-yielding initiatives like expanding [or] renovating their store, or consumer-facing advertising.”

As demand has grown and the number of diamonds Dialog dispatches to retailers has scaled up, the three cofounders are intent on maintaining the same standard of service they gave their clients before branching out. They’ve added diamond earrings to the subscription package and are considering more jewelry options. Season 2 of Dialog, it seems, is already in the works.,,

Previous article:
Tips to Charm Your Retail Partner – Part 1 of 2