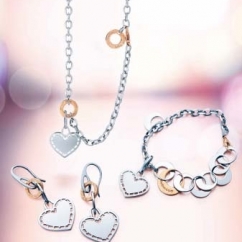 Le Bonheur is celebrating its 58th birthday with the opening of the brand new hospital.

Partnering with leading retailer J.H. Mednikow, Memphis, TN, a major sponsor of the event and one of Rebecca’s premier retailers, Mr. Testi designed nine new pieces that incorporate the stitched heart logo of Le Bonheur with the style of Rebecca.

Jay Mednikow approached Rebecca about the fundraiser because the hospital holds a special place in his heart: “Le Bonheur doctors have touched the lives of thousands of children over the years,” Mednikow said. “One was the little girl who grew up to be my wife, and another was one of my sons. Needless to say, I owe a huge debt of gratitude to Le Bonheur Children’s Hospital. This personal relationship with Le Bonheur is part of the reason that my family and I support it so faithfully.

“When the grand opening of the new hospital was announced and we were asked to be major sponsors, I could think of no one better than Alessandro Testi to design and make commemorative jewelry, and I’m thrilled with the new collection, because it so beautifully evokes the emotional appeal of Le Bonheur and its mission.”

Mr. Testi was thrilled with the opportunity and, when asked about the fundraiser, said:

“I am a father of three, my children are my smile and I love them with all that I have to love. When I was offered the opportunity to help the Le Bonheur children’s hospital of Memphis, I accepted without hesitation and with a desire to do something good.

Life gave me the chance to succeed as a designer of an internationally known brand, so I think it is a good thing for me to put my most precious skill at the service of a good cause. I created what I believe to be a refined collection of jewels, made in Italy, using the “Le Bonheur” stitched heart as inspiration. With the symbol of the heart, I indeed wanted to capture the affection and hope we have towards the hospital’s young patients, along the way donating the proceeds to the institution whose mission it is to cure them.”

Rebecca will donate 10% of sales of the line to the Le Bonheur Children’s Hospital.

The Grand Opening Festivities culminated with a main gala on June 19. Mr. Testi and other representatives of the Rebecca brand were in attendance. The black tie event will included a tour of the hospital and auction. All proceeds went towards music therapy, play and art to better the lives of healing kids.

Testi USA is located in Santa Monica, CA and is a division of Industrie Testi SpA, which is headquartered in Empoli, Italy.For further information contact Morgan Kleiderlein, Testi USA, 310-319-9600, morgan.kleiderlein@testiusa.com.