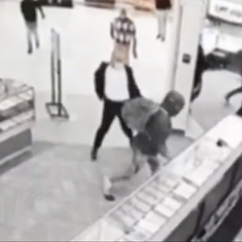 Bhatti has a concealed carry permit for the gun and used it lawfully, but the Jewelers Security Alliance firmly advocates that jewelers do not draw a weapon even if the robbers do.

“Attempting to physically protect your store with weapons presents a grave risk of injury or death to a jeweler. Additionally, the jeweler could face serious civil or criminal liability if [he or she] injures someone. Rely on your insurance protection,” says the organization.

No weapons were fired in the San Bruno incident and Bhatti told reporters he reacted instinctively and wasn't trying to be a hero, but JSA president John Kennedy warns the next jeweler might not be so lucky--and worse, they might be killed or accidentally shoot a customer or bystander.

According to a San Bruno Police Department report, the attempted smash-and-grab robbery took place Friday afternoon, January 21, in the Tanforan Mall. Five suspects, believed to be in their teens to early 20s, entered the jewelry store with one of the group carrying a crowbar. Store surveillance video shows the thief smashing a showcase, then turning to Bhatti and raising the crowbar as if to hit him. Bhatti drew his weapon and the suspect fled the store, but then a second member of the group drew a gun and pointed it at Bhatti, who turned and pointed his own weapon back. The suspects then all fled the store. Neither weapon was fired and there were no injuries. 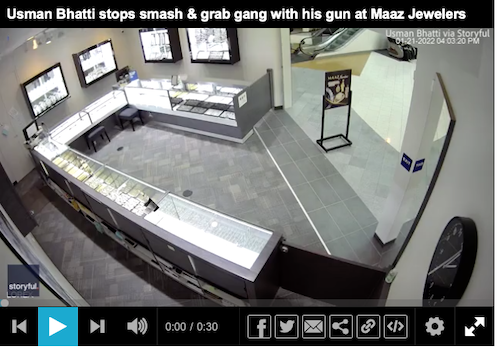 This was the second smash-and-grab robbery at the mall in the space of a week. KTVU-TV2 reports another jewelry store was hit Monday, January 17. That store did sustain merchandise loss.

San Bruno police are still looking for the Maaz robbery suspects, who are described as follows:

Anyone with any information is asked to contact the San Bruno Police Department, (650) 616-7100, or email sbpdtipline@sanbruno.ca.gov. Information can be left anonymously.