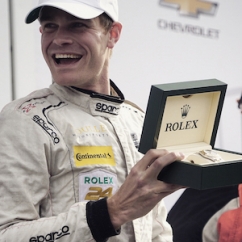 Daytona Beach, FL—Nick Boulle (left), son of jewelers Denis and Karen Boulle of deBoulle won at the 55th Annual ROLEX 24 Hours of Daytona for the Prototype Challenge (PC) Class. Boulle, 27, anchored in the final segment and cruised to an easy victory. His parents own de Boulle, an independent jewelry salon with doors in Dallas and Houston, TX.

Boulle’s No. 38 Performance Tech Motorsports Oreca FLM09 finished 22 laps ahead of its closest rival in the 24-hour classic, despite rain and uncharacteristically cold temperatures for Florida. The car (below) features an open-cockpit and technology such as a carbon fiber chassis, carbon brakes and sequential gearbox. Weighing in at 1990 pounds, the PC car reaches top speeds of around 190 mph, with more than 450 horsepower.

Boulle drove alongside Performance Tech Motorsports drivers James French (23), Kyle Masson (19) and 17-year-old Patricio (Pato) O’Ward, one of the youngest in the history of the race. Each driver had his turn leading the PC class. “I cannot say enough about how well the team all performed,” said Boulle, whose debut last year at the 54th Annual Rolex 24 Hours of Daytona resulted in a second-place finish in the Prototype Challenge Class. 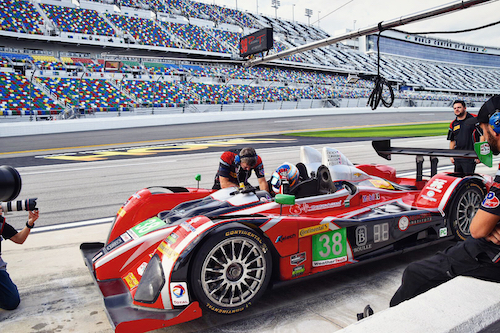 "Taking the class win in the ROLEX 24 Hours of Daytona is a dream come true for drivers across disciplines of motorsports from NASCAR, WEC and Indy car,” Boulle said. “There's no such thing as an easy ride at a race like this, but everyone performed flawlessly. We did take a few risks to win, but our strength was in our preparation and consistency. I can't wait to see what else this result for de Boulle Motorsports, Clover Partners, McFadden & Miller and Palmares Energy leads to next.”

Winners of this historic 24-hour endurance race receive very special engraved stainless steel Rolex Daytona watches. The 2017 edition of the luxury watch, which Boulle received, features both gold and stainless steel with an oyster face. The watch, one of the most sought-after timepieces in the world, was designed to meet the demands of professional racing drivers, and the de Boulle location in Dallas is an authorized Rolex retailer.

New York, NY—Tiffany CEO Frederic Cumenal stepped down following yet another disappointing holiday season. He joined the retailer in 2011 after a 15-year stint at LVMH in various executive positions, mainly in the luxury conglomerate’s wine and spirits division. He was named Tiffany’s CEO in 2015 when former CEO Michael Kowalski became chairman.

Although full results for the retailer won’t be released until March, its November-December year-on-year comps were down 4%, leading Cumenal to resign and Kowalski to again take the helm on an interim basis in hopes of turning around the retailer’s fortunes.

It’s the second shakeup in a month for the renowned blue box: jewelry designer Francesca Amfitheatrof stepped down in January to be replaced by Reed Krakoff, formerly of Coach.

The retailer tapped Amfitheatrof in 2013 to bring a much-needed design boost to its collections, especially following the uninspired performance of its heavily-promoted partnership with renowned architect Frank Gehry. Amfitheatrof’s most notable contribution was the T collection, but it wasn’t enough to strike a relevant chord among consumers. A news release from the retailer acknowledged it hasn’t responded quickly enough to market trends, something other analysts agree is an issue, but it’s by far not the only problem dogging it in recent years. Tiffany seems to have not only lost its way but lost sight of the demands of a changing marketplace.

About a decade or so ago, the retailer jacked up prices of its most popular silver collection just as luxury consumers—especially Millennials—began demanding more affordability and less brand-heritage snobbery in general. With silver driving 30% of Tiffany’s sales by the early 2000s, The Wall Street Journal said the price increase—as much as 400% for some items—was a quintessential example of killing the goose that laid its golden eggs. Not surprisingly, the move quickly quelled demand for once must-have items like its “Return To Tiffany” collection and also did not help Tiffany’s case with self-purchasing women, a market it now desperately needs back.

Adding to the brand’s woes is a sharp decline in sales at its Fifth Avenue flagship, which is located next door to Trump Tower. Both high security and protests following Donald Trump’s campaign and subsequent election and inauguration has been a troublesome issue for many retailers in the area, including not only Tiffany but also tony watch retailer Tourneau.

Meanwhile, disappointing holiday sales at Sterling brands Kay and Jared the Galleria of Jewelry (down 5% after a 5% increase last year), drove COO Ed Hrabak, and Trina Kochanek, EVP of Signet’s North American store operations, both to announce their retirements January 30 after more than 30 years with the company. Bryan Morgan, executive vice president of supply chain management and repair, was named to replace Hrabak, and two new positions—president and chief customer officer, and chief retail insights and strategy officer—were created. Sebastian Hobbs, currently managing director of parent Signet’s UK division, will relocate from London to take the president’s position here, and current CMO George Murray will step into the new strategy officer role. Both will report to Sterling CEO Mark Light. The company also added Brian A. Tilzer, the chief digital officer at CVS Health, to a new position on its board of directors.

Light blamed the sales drop largely on the brands’ websites, which were upgraded last spring but not well enough. Although tested, they failed to anticipate or accommodate the robust traffic of a holiday season where online shopping rocketed and in-store traffic declined across all retail categories.

And finally, Ivanka Trump's fashion empire took two big hits over the weekend as both Nordstrom and Neiman Marcus announced they will drop the brand. While her father’s controversial moves as both candidate and president sparked calls among protesters to boycott her brand, both luxury retailers cited poor sales of the brand, rather than protests, as the reason for dropping it. Nordstrom carried mainly Trump-branded shoes and apparel; at Neiman Marcus, Trump’s fine jewelry line is out and the brand has disappeared from the retailer’s website as well.

Next article:
The Right Way To Set Your Retail Price