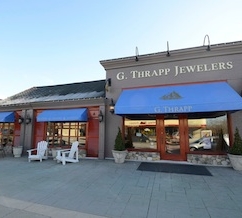 Indianapolis, IN—Another prestige jeweler is closing up shop. Following in the footsteps of Bill and Cyndi Sites who are closing Ward-Potts Jewelers, and Ellen and Charles Lacy who closed Lacy & Co. several years ago, Gary Thrapp of G. Thrapp Jewelers is retiring.

After 32 years on the same corner of Indianapolis, the announcement of his retirement sent waves of disappointment through both the jewelry industry and his neighborhood. Residents and other retailers interviewed by WTHR-TV channel 13 in Indianpolis said Thrapp was instrumental in sparking the gentrification that transformed the neighborhood from rundown to a chic shopping district, and they’re sad to see him go.

Thrapp himself said it was “just time.” His decision was neither financially motivated nor the result of a horrific home invasion he and his wife suffered three years ago. He was shot in the leg and stomach during the invasion, and his wife had a gun held to her head and her jewelry stolen. The perpetrators were never caught.

Financially, he told the Indianapolis Star that 2014 was the best year he ever had—“we knocked it out of the park,” he said—but he has had retirement on his mind for longer than that.

The store will remain open through January and likely into early February, says the Star. Thrapp has amassed a collection of memorabilia that was central to the store’s atmosphere, and he wants to have time to deal with it, and also to be sensitive to the needs of his 17 employees who will soon have to find other jobs.

Charlotte, NC—Blackstone Group, one of the world’s largest private equity and investment firms, is getting into the jewelry business. Its Blackstone Tactical Opportunities division has acquired Diamonds Direct, a seven-store chain based in North Carolina.

Diamonds Direct president and co-owner Itay Berger will retain an ownership stake in the business and has been named its CEO.

In the past, Diamonds Direct was the subject of both intra-owner legal disputes and a cyber-piracy lawsuit filed by Virginia-based Capri Jewelers. Capri Jewelers also sought and won an injunction to keep Diamonds Direct from using the name in the Virginia market, where Capri uses the term in its own advertising.

Next article:
Celebrity News From The Country Music Awards And Doves