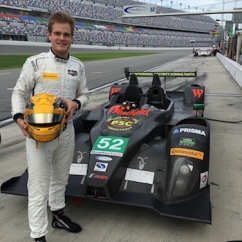 Dallas, TX—After a successful three-day test at the Daytona ROAR, the de Boulle Motorsports team headed back to the Daytona International Speedway for the 54th running of the Rolex 24 at Daytona on January 30-31, 2016. Nick Boulle, the 26-year-old son of Denis and Karen Boulle, owners of de Boulle, is the first retail jeweler Rolex dealer to compete in the demanding 24-hour sports car race.

New to Daytona, ROAR marked Boulle’s first trip around the 3.56-mile circuit in a PC car. Rounding out the team is Returning PR1 driver Tom Kimber-Smith, Robert Alon and Jose Gutierrez. The team raced in the Le Mans Prototype Challenge car. The car features an open-cockpit and technology such as a carbon fiber chassis, carbon brakes and sequential gearbox. Weighing in at 1990 pounds, the PC car has top speeds at 185 mph and 450 horsepower. Boulle and the team finished on the top of the time sheets in the third test session in addition to proving all of driver’s reliability and pace.

Nick Boulle was drawn to motorsports and began racing go-carts at age 12. By the time he was a 20-year-old student at Southern Methodist University, Boulle had produced top results in national events and was racing as a Volkswagen Junior Driver in addition to coaching drivers in carts and racecars.

“I have always loved motorsports,” he says, “and racing in the Rolex 24 has turned a dream into reality.”

The de Boulle team came in second for its class. 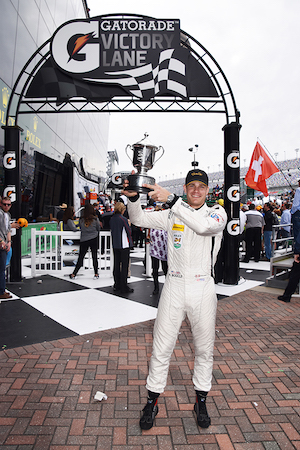 Next article:
Marcus Lemonis, Master of ‘The Profit,’ Wows Centurion