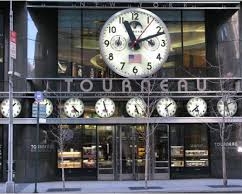 New York, NY—Tourneau, the luxury watch retailer with 31 stores across the United States, is looking for a buyer. According to a report on Debtwire.com, the tony retailer is struggling on two fronts: one, the decline of luxury watch sales in the United States and worldwide; and two, the proximity of its main flagship (left) to Trump Tower in New York City is driving down sales at its top-grossing location.

Swiss watch sales are having one of their worst years ever, with the biggest monthly drop in history in October 2016. Exports were down 16% globally year-on-year in October, and down 17% in the United States. 13 of the top 15 markets for Swiss watches are in negative territory, says this report, and average prices per timepiece also are down.

Smartwatches bear some of the blame—and any watch industry executive who says otherwise is not facing reality, say experts—but a bigger issue is a sharp drop in demand from Asia, which was riding a boom as rich Chinese indulged in luxury watches. Sales in China may have hit rock bottom and appear to be turning around, but it may not be enough to make up for the decline in other key markets.

The other “yuuge” issue troubling Tourneau is a sharp decline in sales at its New York City flagship store, which is one block east of Trump Tower. Like Tiffany & Co. with its Fifth Avenue flagship, Tourneau relies heavily on its TimeMachine flagship at 57th Street and Madison Avenue to generate approximately $40 million in annual revenue, according to this report in the New York Post, which speculates the company would sell itself in a prepackaged bankruptcy. The TimeMachine is a popular tourist destination—or, rather, it was until traffic around the heavily-secured Trump Tower started making life very difficult for retailers in the area. Sales at the TimeMachine are off $2 million, says the Post. Likewise, a November report in Forbes, is one of many detailing the woes of Tiffany & Co.’s flagship, literally next door to Trump Tower. The retailer is enjoying some improvement in sales and topped analysts’ estimates in the third quarter, though the boost came primarily from rebounding demand in Asia, not from the beleaguered flagship.