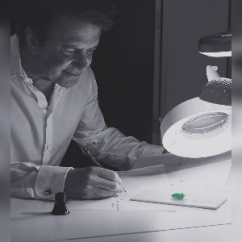 Greensboro, NC--Robert Procop spent his summers during his teenage years working at his father's engineering plant, learning the art of fine micro precision tooling, which would set the foundation for his future trades.

Procop learned how to curate exceptional gems when he was 16 and quickly developed a fascination for them.

Procop opened his store after college, called Diamonds on Rodeo Drive in Beverly Hills. He continued practicing there and went on to achieve a presidential commission — his first ‚ with former president Ronald Reagan.

That was the beginning of his incredible portfolio which now includes the likes of Angelina Jolie, Brook Shields, and others.

Procop spent several years traveling worldwide and developing relationships with artisans, cutters, and mining site holders to ensure his items were ethically sourced. His reputation for work has seen him handle some of the world's finest gemstones, including the Cleopatra Sapphire, the Heart of the Kingdom Ruby, and the 665-carat Imperial Emerald.